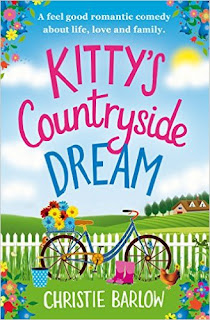 Devastaded by the death of her mother, for whose care she gave up her career and university plans, Kitty is turning overnight into the confused owner of a chicken farm and a spacious house (plus a cat) left by a grandmother she never was told about. She, who ' never went further than the local town', moved over in a quint village where she does not know anyone and is curious about how her new life will start.
The challenges to her lonely existence spent mostly in the company of books are following one after the other: first, life and working at the chicken farm is far beyond her competence and she has to deal with an overwhelming amount of work and chicken with very strong personalities. She has a crush on Tom, the manager of the farm who was the apprentice and right hand of the energic grandmother Agnes. She wrongly assumes that Tom is in a relationship with the beautiful co-worker Jeannie and even they are about to have a baby together.
And there is even more higher levels for her emotional roller-coaster new life: she discovers a secret diary of what she was supposed to be her aunt but at the end of the story she will discover that in fact, the author of the confession, Violet, is in fact her mother and her father is no one else than Jeannie and Robin father. She was just about to date Robin, among others things that happened to her. Her teenage mother was sent to a Canadian relative by Agnes, Kitty being adopted by Violet' sister, Alice.
There is a kind of happy ending too, once all the misunderstandings are clarified and the situation is accepted with an optimistic sight into the future: she and Tom will get married, she has a father and a new family now. More importantly, she finally had the feeling of belonging. A good nature, she will not nurture any resentment against her adoptive parents, to whom she remains grateful, but she will not be able to meet her real mother, as she died suddenly couple of months before succeeding to achieve her planned trip of reuniting with her daughter.
The story is interesting and you can hardly have time to get bored because there is always something going on. Personally, I would have expected that Kitty is curious in the first to find out more about a mysterious rich grandmother and not to just go with the flow and expect a couple of months till the things are getting more clear. I found a bit annoying that 'don't be daft' appears way too often, sometimes even one page after the other.
The cover is so lovely and radiates a lot of positive energy, in line with the message of the book.
A recommended read for the summer or winter holidays, or for a quiet weekend, with many cupas and a lazy cat snuggling on the other side of the bed.
Disclaimer: I was offered the book via NetGalley.com, but the opinions are, as usual, my own
Posted by WildWritingLife at 27 February