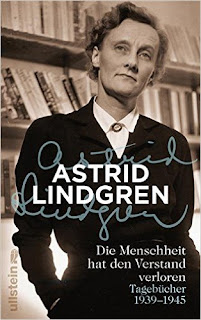 I haven't read diaries in a long while, but I used to love this literary form a lot, because it shows human faces of the person behind the writer and also gives suggestions about the inspiration and various writing influences. I usually stay away of best-sellers, regardless the domain they belong to, but I always was curious to know more about the writer who created awesome characters like Pippi Longstocking so I gave in and got the German version from my local library.
Publised in English as War Diaries - the German version can be translated as 'Humanity lost the Reason' is very appealing and probably one of the reasons why I picked up the book - it is based on the 17 volumes of diaries kept by Lindgren between 1939 and 1945. Besides her personal hand written observations, it has press clippings and photos from the time. Written in her early 30s, before becoming famous for Pippi, the writings can be considered as notebook for recording the daily reality. This is for me the only excuse for the aridity of the writing without any literary appeal for me.
Journalistic scribblings of facts recorded from the news, short notices about trips and holidays, children celebrations, a short period of depression following a marriage crisis. She is against the war and as a former employee of Sweden special Intelligence Agency in charge with mail censorship she is reproducing from time to time information from the letters she opened, especially regarding the fate of Jews in Europe. Lindgren appears also like someone familiar with the political realities of Europe, going as far as the complicated Balkans and Eastern Europe. But she behave mostly as a journalist, an involved one but still cold and careful to the facts.
Although I did not find too much literary relevance, the book is relevant from the historical and political point of view. The personality of the writer Astrid Lindgren still remains mysterious for me.
Rating: 3 Stars
Posted by WildWritingLife at 09 March