With a background in microbiology, Gary F. Jones is currently a full time author of novels based on his experience, written with a lot of smart humour and inspiration. In couple of answers, he outlines his writing process and talks about his latest book: A Jerk, a Jihad and a Virus to be released at the beginning of May.

Photo courtesy of the author

How did you chose the topics for your books?

Each of my books began as a mental picture of a dramatic scene, a scene that set the plot for the rest of the story. In both cases, current events or new discoveries in biology clicked with memories and started me thinking about the scene.

Doc’s Codicil, my first book, was based loosely on my years in rural veterinary practice and raising our four very active children. The inciting scene came to me when I tried to imagine how I would have explained current political decisions to a four year old. The idea for A Jerk, A Jihad, And A Virus (JJV) was based on recent developments in virology and a rumor I’d heard many years earlier about a sample of a dangerous virus missing from a lab. The sample was found, but the idea of a missing sample stayed with me. 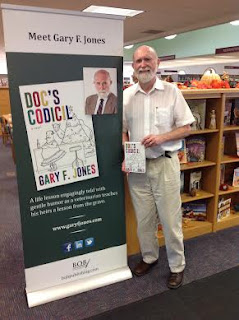 How much has your background influenced the settings of JJV?

The first third of JJV depended entirely on the years I spent as a graduate student in microbiology at the College of Veterinary Medicine, University of Minnesota. I set the story at the U of MN, St. Paul campus because I was familiar with the buildings, campus, and city. The chapters set in the Middle East and Pakistan required on-line research and discussions with friends and co-workers who had lived in those areas.

How difficult is it for a scientist to write literature, meaning to 'translate' very complicated concepts for the public audience?

It wasn’t difficult once I realized that I had to focus on the information the reader needed to understand the story. I had an advantage in this, as I’d spent almost two decades explaining lab results to our veterinary clients. When I returned to graduate school, I frequently had to summarize a year’s worth of work into a ten minute talk. That was wonderful training in giving an audience what they need to know and no more.

How much does it take to write a book - including documentation and research, editing etc.?

Research for much of what I wrote about was limited because I wrote about what I’d done, places I’d lived in, or topics I’d studied for years. I spent weeks of work on Google, Facebook, reading, and talking to people when writing about places I was unfamiliar with.

I used on-line writing groups and classes at the UW-Madison Continuing Studies' Writing program for guidance. Many chapters of Doc’s Codicil were completely re-written fifteen to twenty five times and 15,000 words were cut from the manuscript before I submitted it to a publisher.

My publisher’s editor worked with me for about five months, requested a rewrite of one third of the book, and the addition of two more chapters. Editing for typos, spelling, and punctuation (copy editing) took a few weeks. Designing the cover with the artist and editor took roughly a month. From the time the manuscript was accepted by the publisher to publication and release for sale was just over one year.

Editing and revisions for A Jerk, A Jihad, And A Virus took about the same amount of time.

What are your next writing plans?

I’m six chapters into a book about a widower in his early 30’s who returns to the small town his grandmother’s family came from. He encounters a population of eccentrics and a family mystery.
Posted by WildWritingLife at 22 March