Behold the Dreamers, by Imbolo Mbue 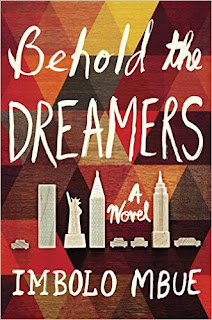 One of the few things I tried to teach myself during my various expat adventures was to avoid high expectations - 'dreams' - in order to spare myself the luxury of big disappointments. As one who spent a high amount of time living in other country that the one I was born, this helped me to cope better with harsh realities of learning new languages, finding friends, connecting with the place, going through the bureaucracy and the hardship of a life on the road. But I haven't come here for a dream, but for the chance of being myself, living in a big European country and being able at any time to walk in historical places and see big artists at work. Call this cultural immigration, but this was my choice. And you need a lot of courage to make this step, at any age.
The protagonists of the debut novel Behold the Dreamers, by Imbolo Mbue, Jende and Neni, do have a lot of dreams about America. Compared with their native Cameroon - the author's country of origin -, they assume it is a country of equality of chances, with no corruption and where in a spam of a generation you can achieve social and financial stability. But you need to work hard, day and night, more than job, but it is achievable.
Jende is working as chauffeur for the rich Edwards rich family, with the father a top executive at Lehman Brothers, and he is closer than ever to the American dream. But then Lehman filed for the largest bankruptcy in American history and the dream is over. Not necessarily because of the financial turmoil, but because the Edwards are going through their own bankruptcy, a family drama unfolding behind the white walls of their luxurious  penthouse. Caught between his boss, trying to recover after the financial shock with adventures with prostitutes and the over-controlling Edwards wife, who had asked him to report all the moves of his husband, Jende will fail, being fired for being loyal. He returns to a life of scarcity when two jobs are hardly able to make their daily ends meet. Meanwhile, his wife, Neni, who has the dream of becoming a pharmacist should put her aspirations on the side, as she is pregnant with their first American-born child. She is even awarded membership in an elitist fraternity, which doesn't guarantee her success to apply to scholarships, as long as her legal situation isn't solved. And it will never be solved anyway.
People can wake up from the dream though. Like Vince, the oldest son of the Edwards, who decides to give up a career in law for searching mindfulness in India. Or Jende himself, who will ask to return to Cameroon, after his immigration file is deemed to fail - the immigrant's bad luck to rely on a unreliable lawyer. As for the end of the novel, the family is back 'home', using their savings and knowledge to build a new life. Even Neni, in whom I put all my chances for staying, resigned and for the sake of the family she gave up her dreams. Instead, she returns to Limbe with loads of brand clothes, gifts from Edwards, and fake Gucci bags, convinced to show her people that her times in the States wasn't for nothing. Vanity.
The writing is so captivating, particularly the dialogues, that I couldn't resist to give up the story until was over. The characters are so real and individual that you even can think about people you know and stories you've heard.
The social - and political - message is not obvious, but insidiously spread over the story, the kind of anti-system and Western-critical kind that usually enfolds in times of such big doubt, as the financial turmoil and the world after 9/11 in general.
Imbolo Mbue is the writer I wish to read and hear more about in the next years.
Rating: 4 stars
Disclaimer: Book offered by the publisher in exchange of an honest review
Posted by WildWritingLife at 22 October