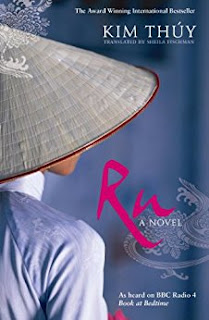 Decades before the current refugee crisis in Europe, the world had faced an almost similar - by means of transportation, at least - human catastrophe: the Vietnamese trying to escape by boat the war ravaged country. Kim Thuy was one of those people, arriving in Canada when 10. Ru - lullaby in Vietnamese, but sounding also like the French word for street and river - is her account of her identity appropriation.
Like a slow river, the writing - I've read the English translation, as the book was published in French - flows, with point-counterpoint of topics developed from a vignette to the other. 'I first saw the light of day in Saigon, where firecrackers, fragmented into a thousand shreds, coloured the ground red like the petals of cherry blossoms or like the blood of the 2 million soldiers deployed and scattered through the villages and cities of a Vietnam that had been ripped in two'.
It is less than autobiography, and more an account of the 'boat people' destinies and past, aimed to be a 'voice of the Vietnamese people', aiming to compensate the silence of historical references. The life in the new society - Canadian in this case - was hard, but achievable, and many succeeded build a new life. According to her literary testimony, there were less tensions and drama, just a lot of work and desire to integrate. Each one of the slow paced stories is a testimony, tells a little human story revealing more about the Vietnamese society, its human touch and lost memories. Although a literary fiction, it forces the reader to go deep into the anatomy of feelings and to open up to a new world. At the end of the book, the slow sound of the river song still flows in your ears, reminding you to see more than a thing differently. It is both history, especially political history - and psychology in one single little book. You may feel guilty that it took some time to understand this generation of Vietnamese and grateful for such a testimony to bring you the shades of truths.
Rating: 4 stars
Posted by WildWritingLife at 26 October