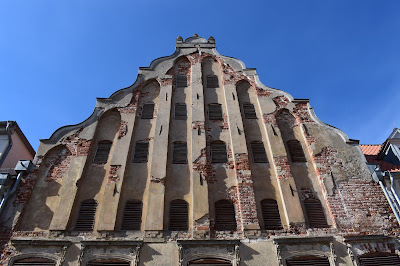 My words will never be enough to show my gratitude for the opportunity to travel that much around Germany and abroad, discovering so many interesting places and histories. As books are one of the most important part of my life, my gratitude increases as I am revealed interesting stories about writers and their books.
A couple of weeks ago, I visited Greifswald, in the Pomeranian part of Germany, part of my usual travel assignments, and on a side street near the main square, I stumbled upon a derelict building, that looked as once used to be one of the beautiful stone houses built in the local architectural style. In this house used to live the so-called Pomeranian Sappho, a young poetess named Sibylla Schwarz. Her father used to be the mayor of Greifswald in the 17th century, particularly during the hard years of the 30-year religious war in Europe that affected considerably this part of Germany.
Sibylla - or Sibylle, according to other version, lived a very short life, thinking in our 21st century terms, of only 17 years. Most of her work, over 100 poems published posthumously by her teacher Samuel Gerlach - were written as a consequence of the unstable and troubled times of the war. 1627 was the end of the good times, as the war and its terrible enfolding tragedies entered Greifswald. As a consequence of the war, this part of Germany ended being under Swedish rule for almost 200 years.
Sibylla's poems are talking about friendship, war and dead, and the need of human solidarity. She also shared her love and nostalgia for her beautiful domain of Fretow, near Greifswald, that her family had to leave after the war.
Although she lived a short life, her poems are considered as one of the few examples of Baroque literature in Germany. In the front of the house, there are often organised various literary happenings and shows inspired by her poetry.
Posted by WildWritingLife at 06 October