The arts of storytelling: Nutshell by Ian McEwan 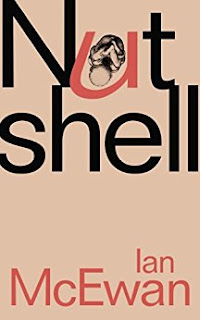 There is a story with many other stories. It starts as all our stories: 'So, here I am, upside down in a woman'. The story teller is an embryo in the last trimester - was it this choice a diplomatic way to avoid the discussions about when exactly the fetus is becoming a human - who is the silent, but mind active witness of the plans of her mother and lover to kill his father. The location of the plot by Trudy and Claude - who happens to be the less gifted brother of the poet husband - is a decaying house in Central London, on a location worth many millions.
From the comfort of his amniotic sac, where he learns, among others, to distinguish between different sorts of wines and had the first taste of a scotch - half water though - the soon-to-be-baby is listening, reading emotions, learn together with his mother from the audio classes, is memorizing the poetry his father wrote for the mother when they once were in love, listen the latest news about the world - which is not feeling well at all - 'children are used as bombs in market places'.
They, the adults, do a lot of plotting and end up by hating each other and they regret hating each other when it is too late. Despised by the decaying humanity encapsulated in the equally decaying house, the little embryo tries to kill himself but fails. Meanwhile, his father is dying by poisoning, freeze liquid mixed in his favorite (yellow) smoothie. He cannot stop the crime but he can decide when exactly he wants to go out, the moment when his mother and Claude were about to run, estimating correctly that their story doesn't stand up for suicide and they will be caught, sooner than later.
Although predictable, the crime story is written in alert mood and you, the reader, remain captivated about the details and the preparations and the ensuing episodes. The author doesn't want to create more than that, and the emotional shocks are strong enough. You can see how big love is turning into utter hate, how the excitement of the crime preparation and the emotions provided by sex are followed by sour guilt and fear.
And you have a lot of questions to ask: why Trudy ended up with the loser from the family, when her husband was so achieved, although without financial skills? why the baby is so neglected in their conversations - except when he is promised to be get rid of? how the story between Trudy and Claude started?
Now, there are other stories too, many of them as exciting as a crime novel. For instance, the Hamlet-ian references, with a bit of Macbeth too, of the triangle: (Ger)trudy, Claude(ius), John. It can be also a reference to the Indian Mahabharata. Or to any story regarding the envy between brothers and the woman that is the most vulnerable trophy to take.
There is also the ironic references to our contemporary world: where people go to the popular Dubrovnik destination, eat smoothies and listen to self-improving podcasts, often just to have some buzzing background, or can be victims of the real estate sharks.
My favourite monologue is about the state of the poetry, the architecture of words and their coming up together in beautiful structures, like the pieces of the colourful kaleidoscopes.
'So, here I am, upside down, in a woman'.
Rating: 5 stars
Disclaimer: Book offered by the publisher in exchange of an honest review
Posted by WildWritingLife at 05 October