Book review: The Other Einstein, by Marie Benedict 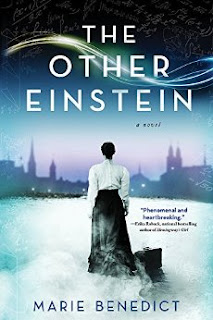 After The Atomic Weight of Love, that I particularly loved - including the fine cover - I had the chance to read another book dedicated to a woman with scientific aspirations brutally ended by marriage. In this case, the main character is the first wife of Albert Einstein, the Serbian-born Mileva Maric, the first woman to graduate the Zurich Polytechnic School.
The two of them met there during the study years and fell in love, promising each other a 'bohemian' future, with husband and wife equal partners in sharing their science and advancing research. As in real life, the courtship part and the effervescent study years are the most vivid and light part of the novel, with Mileva discovering her inner strength and exploring her intelligence while slowly learning her feminine part too. Einstein is hardly noticeable in this section, a shy student looking for alternatives to the classical theories of the teachers and longing for the musical evenings together with his future wife. This section is also an exploration of the deep prejudices and stereotypes typical at the time - we are talking about the end of the 19th century, the beginning of the 20th - regarding women. But Mileva has to cope with a bit more prejudices, as she is originally from Eastern Europe, not an advantage among the predominantly German elites, but also suffers from a limp from birth. One of the most achieved sequence of the book is when Mileva, at the time a primary school student, is humiliated by her peers during a relatively innocent invitation to play, after outperforming her mathematical skills in the classroom. The perspective of a husband-less future was the reason why her parents encouraged her scientific endeavors and invested in her future.
Once she become the life partner of Mr. Einstein - against the wishes of his family and skeptically approved by her parents - her scientific life is about to finish. She is pregnant before being married and gave birth to a girl, Liserl, that will later die in Serbia, her grades fail, and once officially married to him she is just a 'hausfrau' that should answer the needs of the mercurial husband. Probably keen to portrait Mileva better, Einstein looks in this book as a complete arsehole: cheating on her, stealing her academic endeavors - including her contribution to the development of the relativity theory, belittling her as often as possible in a very mean way.
Partly, the research is based on various new documents published in the last years about Einstein, including exchange of letters and an infamous list imposed upon his wife in order to maintain their cohabitation, shortly before the inevitable separation - according to which, she was limited to do his laundry, cook and clean for him, without requiring any other physical intimacy or special attention. The book doesn't pretend to be anyway a scholarly investigation into the authorship of Einstein works and the ways in which their relationship developed was a good opportunity to create a captivating story. The comparison between the fate of Marie Curie and Mileva Maric offers the alternative, not very common but still possible, when marriage and brains can exist happily ever after.  But even today, it is not a common occurrence. Hence, the need of such inspiring books to make women feel less guilty because intelligent and outperforming.
Rating: 4 stars
Disclaimer: Book offered by the publisher in exchange of an honest review
Posted by WildWritingLife at 13 October