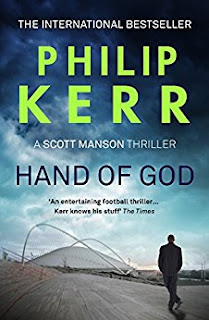 After The Prussian Blue, an impressively well-written political thriller set in the aftermath of WWII, I wanted to read more by the same author whose style I've found entincing. Hand of God has a relatively unfamiliar setting for me - the world of football - but enough political references to the Greek economic debacle to keep me relatively interested. The only book I've ever read touching upon the football was Fever Pitch many years ago, so it was a relatively new topic for me, but the thriller pace made everything more readable.
True is that the first 100 pages are rather developing various fotball and politics related issues, with many details about strategies and tactics on the ground. Especially for someone greatly indifferent to sports in general, it was a big challenge to keep reading, but the writing made it look like an introduction to a greater, bigger story. Those pages are used wisely to create the context of the story and actually it helps someone like me, completely unfamiliar with the context to slightly understand the next steps. It is a practical approach, but the disadvantages are that sometimes the discourse is too doct therefore artificial and unnatural, and that the reader is soaked into way too many details.
And when the crime is taking place, the private investigation started by Scott Manson, a former cop that built a career in the world of sports is navigating against the all odds to bring light to a very complicated case which involves a drawn escort and the sudden death of a player during a match. As the entire team is stucked in Athens until the case is solved, Manson is fighting against the clock to put together all the small pieces of the puzzle, in a dysfunctional environment. I loved how the details are coming together and the suspense following until the very last pages.
It is a page turning novel, with an interesting story construction. Recommended to those not very keen to go watch a football game, but curious enough to spend their time in the company of a good thriller.

Posted by WildWritingLife at 17 July