Sarong Party Girls, by Cheryl Lu-Lien Tan was one of my favorite books of the last year. The author was not new to me, as A Tiger in the Kitchen, a collection of food experiences and memories from Singapore was another favorite of mine, many years back. Always busy writing or introducing her book, Cheryl was kind enough to answer a couple of questions for my blog. You can find her also on her website: www.cheryllulientan.com, or on Twitter: CherylTan88 or Instagram: CherylTan88 (Warning: her social media accounts will encourage your glutony and wanderlust). If you haven't read the book yet, SPGs is available as paperback too!

What was your inspiration for the Sarong Party Girls?

​I've always found SPGs and the culture around SPGs completely fascinating -- this little world in Singapore, to me, says something significant about the ​country and the sexual and racial politics of the place. Why is it that there exists a certain type of woman who sees status and material value in having a Caucasian husband or boyfriend? What are the forces of our history -- colonial or otherwise -- that have shaped this desire and belief in the value of Caucasian-ness?
​Seeing SPGs and SPG bars in Singapore always made me ponder these questions, so when it came to writing my first novel, this character that had always fascinated me​ came to mind. This all came to a head when I was in Singapore researching A Tiger in the Kitchen, ​and ​I reconnected with many childhood friends, ​some of whom were recently divorced and had started hitting the bars and clubs again. The more time I spent with these women at these clubs, the more interesting characters and vignettes I kept coming across.
​ One night, a friend who had recently started dating a British man jokingly told me her big new goal: A "Chanel baby," which is a half-expat, half-Singaporean baby, named as such because it's such a status symbol, "the Chanel of babies!" I remember going home and writing that term down right away.
It wasn't intentional but when I sat down to write SPG,
​a lot of ​
these little backdrops and scenes all formed the tapestry that ended up being Jazzy's world.


Why it was important for you to keep Singlish as the communication language of the protagonists?

I've said that Jazzy really dictated this book -- in Singlish -- to me and I'm not entirely joking! Jazzy's voice came very clearly to me from the very beginning and I realized immediately that there was no point trying to write this in proper Queen's English or American English. It would be futile -- and I simply wouldn't be doing her justice. She was going to tell her story the way she wanted it told and I was simply the messenger.

Having said that, I love Singlish. I find it to be one of the most beautiful things about Singapore and Singaporeans -- it is a deliciously rich patois that is so many things: incredibly to the point, expressive, playful, cheekily vulgar, efficient and musical. More important it really speaks to the heart of who we are -- it threads together our languages and dialects so seamlessly and its expressions so accurately telegraph our very essentially Singaporean spirit. When we talk of racial harmony in Singapore, I often think that Singlish is the most beautiful and important examples of that, since it's all of our languages tossed together into an irresistible salad. Also, it's a huge unifier -- whenever I meet strangers overseas who are Singaporean, once the Singlish starts flying out of our mouths there is an instant, very tight bond. I love that. 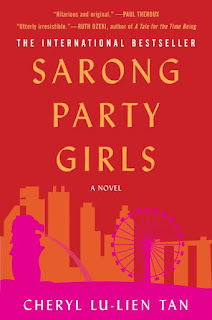 Of course, there was slight concern on my part that some readers wouldn't want to try to understand Singlish, but I had to wonder whether Anthony Burgess worried about something similar when writing A Clockwork Orange or Marlon James when he wrote A Brief History of Seven Killings. The truth is, you have to tell your story how you hear it and feel it or it's just going to be garbage. And then hope that when you send it out into the world, someone will want to read it. That's the best -- the only -- thing you can do.

How important is Singapore for your writing as a a source of inspiration? Will it be the next background for your next novel too? By the way, what will be the next novel about?

​Singapore is hugely important to me -- I found it an endlessly fascinating place when I was growing up there and still do, whenever I return to visit my family. (Almost my entire family still lives there and I go back a few times a year.)​ I find it interesting how the country is so known to the world in some ways -- as one of the most expensive places to live, a tremendously wealthy country, a place with caning as punishment and strict laws on everything from chewing gum to flushing the toilet. And yet the Singapore I know is much more nuanced than that -- it has murky characters, situations and a multitude of stories that beg to be told. These are the stories I want to tell. My next novel, which I'm currently working on, is set in Singapore as well. I'm not talking about it yet but am very much looking forward to sharing that world when I can.

What is your advice for the first time writer, including how to fight writers' block?

The best way to write a book is to just sit down and write -- so many people I know (myself included, when I'm stuck) feel paralyzed and go out of their way to avoid just sitting down and putting pen to paper or fingers to the keyboard. Sometimes the act of sitting down and doing that is all you need to trigger the words -- they may not be the most perfect words or the best story that day but at least something is coming out and you can finesse it all later. That's how I fight writers' block anyway -- I'm not sure but perhaps it was Woody Allen who once said, "80% of success is showing up." I normally loathe platitudes but this is one I don't mind.

Will it be a continuation of SPGs?

​I am working on a new novel but it isn't a sequel in any way to Sarong Party Girls. It's also set in Singapore but in a very different world -- and not written in Singlish. When I wrote SPG I saw it as a contained story but some have argued that the ending perhaps begs for a continuation. Perhaps in the future!​

Posted by WildWritingLife at 07 July