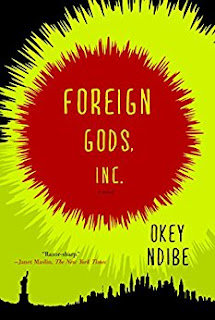 Ike, a New York-based Nigerian car driver with an Amherst magna cum laude degree but a strong accent plans to steal during his stay back home a revered statue of a goddess in order to seal it to a gallery specialized in 'foreign gods'. An anti-hero par excellence, with an impressive record of failures and a mouting debt, he has to deal with a financially demanding family home and a nauseating curiosity and respect for his 'Americanness' among relatives and former school colleagues.
It is a captivating story, which leads the reader ironically through the ridiculousness of new and old religions or greediness prompted by belief. There are mentions about the stereotypical - but real - Nigerian corruption but the focus is more anthropological than political, debating the conflicts and genesis of new religions and belief.
The writing is captivating and takes you into the various episodes of the story. Shortly before the end, you might forget why you are there as the actual aim of the trip to Nigeria, stealing the statue of the deity, is taking place too fast and ends up as another failure in the life of Ike, with a verdict of the 'Foreign Gods' Gallery owner that 'African deities are no longer in vogue'. Ike is offered a check covering less than a small share of his debts, but the piece of wood is operating in mysterious ways but sometimes. But it is too late for a change and the game is over before Ike realizes it.
Although I recommend the book, I was greatly disappointed by the relatively weak story construction within an otherwise very good story. This novel has all the good ingredients of something much bigger, but somehow, it emulated its main character and failed mid-way.