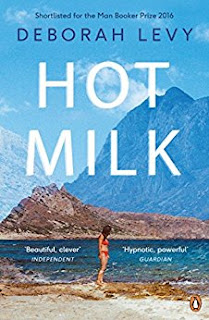 Hot Milk by Deborah Levy is hard to describe in a couple of words, but the poetry of the prose is enchanting. Caught too much into everyday stories, we forgot easily sometimes that there is a much deeper way to look into facts and stories.
25-year old Sofia arrives with her mother Rose in Spain for proceeding to medical checking of the mother's ailing situation. The writing has its own inner rhythm, alternating between the accumulation of details and small observations and realistic descriptions to dream-like projections in the manner of Surrealistic writings and psychoanalitical observations. Here is one of my favorites: 'The cortado is made with long-life milk, which is what they mostly use here in the desert. It is the sort of milk that is described as ''commercially stable'''.
There is not exactly an unique story, but a process of discovery, analysis and introspection. A recurrent motif which appears in the book in many places is the Medusa - with its banal version of the jellyfish - a matriarchal terrible Greek goddess whose gaze turn into stone anyone who looks at her. At certain moments, it can describe the tensed love-and-hate relationship between Sofia and her mother - 'My love for my mother is like an axe. It cuts very deep' -, suffering of a disability rather provoked by emotional and mental disbalances rather than simply medical ones.
Sofia is struggling hard to come at age, to get free from the dominance of the mother. 'I want to get away from the kinship structures that are supposed to hold me together. To mess up the story I have been told about myself. To hold the story upside down by its tail'. An anthropology graduate, she is tempted to see the world through her academic inquiry for research topics. But her scientific curiosity doesn't always - if ever - lead to answers or solutions, and Sofia seems to be the prisoner of her own dilemma and weight of a life which cultivates confusion, be it at the gender or knowledge level.
Hot Milk it is an unusual beautiful novel and definitely I will read and probably review soon too more books by Deborah Levy.