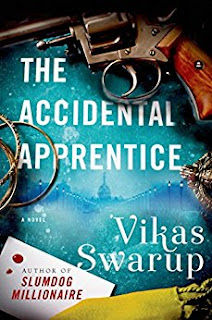 After the world-acclaimed Slumdog Millionaire, Vikar Swarup used the same background - the intricacies and often deceiving slums of the Indian life and society - creating a page turning novel with a bit of all: adventure, thriller, love, social meditation.
Like in an average Bollywood movie, masks fell down, the hidden drama enfolds and there is not always a happy ending. Sapna Sinha, a young lady is randomly selected by an eccentric billionaire to be his next CEO if she passes 7 challenging tests aimed to reveal her leadership and human values.
The ways in which the trials and challenges are described opens the eyes to the daily Indian realities, and this is one of the things that kept me reading the book until its very end. However, after a couple of 'tests', the pace slowed down and the stories became more than predictable. After all, not all Bollywood movies are equally entertaining.
At the end, after a long last trial, I felt a bit betrayed, as too much set-up completely damaged the good story, which at the end looks more as a succession of pranks than a novel. Hovewer, the portrayal of Sapna is very good and she is a character with depth, humar and an interesting personality. The kind of persons you might love to meet in the real life too.
Although I only give a modest 2-star to this book, those interested in Indian histories might find it interesting and entertaining, and Vikas Swarup definitely has something more to say on the literary front.