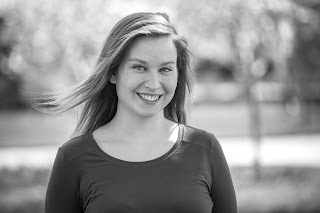 Once again, I am honored and pleased to be part of another blog tour organised by Priya from Writerly Yours, featuring the debut novel of author Kay Bennson - Enshrine.
Living in Northwestern Connecticut with her husband, Kay is a passionate professional writer and a competitive Irish dancer. Part of the blog tour, Kay kindly accepted to share with my readers the story of her creative process.

Question to Kay Bennson: 'Where do you get your ideas from?'


People often ask me; "Where do you get your ideas from? I want to write a book, but I don't know where to start." My answer is to look to your dreams. In all the manuscripts I've completed, Enshrine included, it all started with a dream.

I remember that it was July 2014. I know this because when I woke up, I wrote down everything that I could remember on my phone. The dream wasn't gory or violent. but I could not get it out of my head. I was seeing the dream as if I was awake and through my own eyes, but I was in a foreign place. It was a bustling city, but it was ancient and unlike anything I'd ever seen. It was night time and I was terrified. 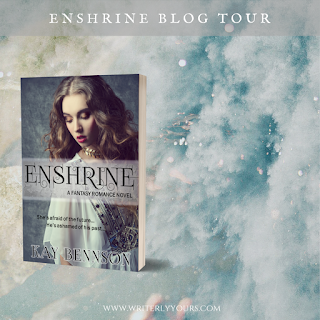 I was being pursued by soldiers. They were the henchmen of someone I never saw in the dream, but I knew he wanted me back at all costs. He was obsessed and manic and as I cowered out of sight I knew I would die before I let myself be found. I was ready to run when someone jumped out and offered me help. He knew how to get me home, but I had to trust him. We began to weave between buildings and people until we reached the ocean and we ran in. I woke up as we began to claw our way through the water.

When I woke up, I was stunned. Dreams fascinate me because while some people think they are meaningless, I truly believe there is something behind them and it might seem weird, but I'm impressed with what my mind can create. I almost see it as an accomplishment. When I have a nightmare about my old boss...not so much.

So where I'm going here is, while you may scratch you head or ask yourself why you dreamed about something bizarre, write it down. It could be something as simple as "Ex boyfriend is secretly half demon" or "Evil corporation takes over high school". As long as it helps you remember and you can come back to it later if something strikes you. You won't know until you try.

'What is the most challenging part of being a writer?'

Another question that people often ask me is what is the most challenging part of being a writer? There are many things that I could tell you, but I think I'm going to stick with the one that resonates with me the most.

Don't get so lost in pleasing everyone else, that you lose sight of why you wanted to write the story in the first place.

I used to be someone that worried about what other people thought of me. To be honest, I was terrified to have people read my writing because I didn't want them to tell me it was garbage. While I feel that I've gotten past that hurdle, I still find myself worrying about other people when I need to worry about myself. A great example of this is when I found out that my mother's friend wanted to by the book for her daughter and she wanted to know if it was appropriate. Enshrine is absolutely okay for Young Adult Readers, but I had started working on the sequel and was thinking about having two of my characters take their relationship to an intimate level. I was literally in a panic over what to do, to the point that I stopped working on the manuscript.

I made a realization. A) That I needed a writing time out, and B) that I'm never going to please everyone out there. Some people might not mind the content of my books and others might not approve of what my characters do. Regardless of my readers choices and reactions, I can not control what they feel. Knowing that now is liberating, but man, it was a long time coming!

I know people won't like everything I do, (My own mother disliked how something went down in Enshrine) but at the end of the day, I write to make myself happy as well as others. I have learned that when you are happy with yourself nothing else matters and everything seems to fall into place, so I hope this advice can make you feel the same.

Titles and inter-titles belong to me. Photos from the archive of Kay Bennson
Posted by WildWritingLife at 28 August