Book Review: All the Ugly and Wonderful Things by Bryn Greenwood 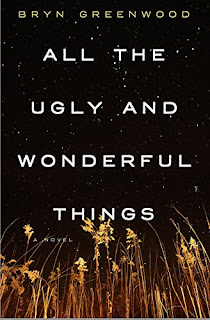 I rarely read a book which is beautifully written, emotionally challenging - even draining - with complex characters but with the main story completely deceiving.
The love story which started when Wavonna Quinn was eight years old with a man at least 17 years her senior might be break taboos, but in fact it is the weakest point of the entire story. The evolution of the romance is so predictable that sometimes I was tempted to skip the pages describing the details, convinced I was not supposed to miss anything. Except that actually I was missing the short rhythmic polishes sentences bringing the emotional turmoil of the characters into your life.
When there is so much emotional weight, and characters out of the normal world, the choice for a different kind of romance makes sense, but the romantic story as such should be more than your soap opera adventure next door. When everything fails and humanity fails too, the search for wonderful things makes sense, but it could rather be friendship or anything else but not that upside down grotesque relationship. It doesn't have to do with the underage sex, but with the way in which the reader is offered the story, like you really have to like it and consider it the best thing that can happen in the book. And it probably is, but not without encountering the risk of creating a stereotypical predictable story. It is so easy to ruin a book with the potential of being a good piece of literature.