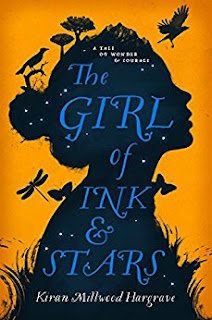 Set on the imaginary island of Joya, in an imaginary world, The Girl of Ink&Stars is a middle grade fantasy book recommended to curious and ready for adventure youngsters on the way to becoming teenagers.
First and foremost, it not only has a dream-inducing cover - if you read my blog you might know already how interested I am in the cover of books as well, besides the writing of books -, but also has fine graphic inserts on the pages.
Daughter of a cartograph, Isabella is living on an island dominated by a heartless governor, whose daughter is her friend. When a girl school colleague of them is found lifeless, the monotonous life on the island is disrupted and the layers of magic and fantasy are invading the space, not always with benefic effects for the humans inhabitants. After the daughter of the governer herself disappears trying to bring light into the murder, after a fight with Isabella to whom she is trying to prove she is not 'roten', an expedition starts to find her, headed by the governor himself. The entire journey is unpredictable, with cruel episodes when the chance of survival seems to be impossible.
The book, aimed at readers between 10 and 14 years old, has elements typical for this genre, such as a moral challenge or the confrontation with death. The elements of dreams and fantasy are wrapping the story as cotton candy clouds, whose slow pace infuses the story with an outerwordly fragrance.
However, I had a couple of issues with the book. For instance, I had more than once the feeling of deja-vu - or, deja-lu, to be precise, which for a beginner reader doesn't count maybe, but still would have expected more originality. Another critique is that if you are expecting a fast-pacing story you are in the wrong place. There are a lot of descriptions, most of them beautifully written, but they often overweight the chain of events as much as you can feel the narrative being caught somewhere between two sequences. Overall, I felt that the book has a bigger potential than achieved.
It is a recommended read for a long summer day, for poetry and fantasy loving kids.