Book Review: Before We Visit the Goddess, by Chitra Banerjee Divakaruni 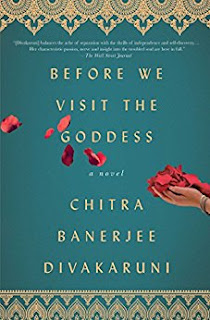 The stories between mothers and daughters are never easy to be told. The literary shape is only a polite way to create meanings and sometimes to offer excuses.
Three generations of women, two of them were born in India, are coming at age, longing for a sense of home and emotional belonging. Recently I was suggested that we, in fact, might replicate, more or less consciously, the family relations and patterns we already witnessed. I am not convinced it is like that - and I refuse to believe that things are so simple in life.
For the simplicity of the narrative, this story actually follows such an unrealistic pattern, but fortunately, the developments are less predictive. Through betrayal and abandonment - who else but your mother can forgive you for those - strive for independence and nostalgy when it is too late to say 'good bye' or 'I am sorry', the heroines of the novel are revealed in their emotional, although unusual emotional complexity.
Regardless if they lived in India all their life, left the country to never see it again or never had any direct connection with this culture, the longing for home is the red line painfully overpassing continents and failed relationships. Also stereotypically - especially when it comes from non-European cultures - the remedy for sadness and alienation is food, which predictably is savourously described - but not recipes though although at least for some puddings I wish they are as I am stereotypical enough myself too to be an easy pray of such culinary intermezzos.
Despite my relative disappointment with some literary approaches, I still enjoyed the book because recurrent or not, all of us we can find ourselves sometimes in episodes of mother-daughter relationships. After all, maybe life is simpler as we try to convince ourselves it is.