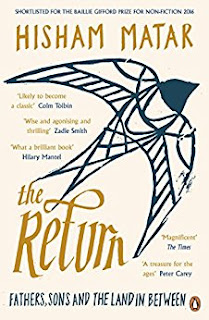 I knew more that Qaddafi was the clown-dictator of Libya and for different reasons I followed the 'opening' of the West to the Libyan (oil) regime, started by the then-EU member Great Britain. In various circumstances, the gossips about his excentricities as a human and the abuses of his sons were known at many levels of the international organisations, including those with a certain 'soft power' impact, but it was outrageous how the situation in this country was rather taken as a joke instead of seriously being considered as a reason to increase the pressure for democratization. As in the case of other dictators, it seemed that Qaddafi will most probably die peacefully in his tent.
The Return, by the American-born Libyan author - the first literary work I ever read associated to this country - Hisham Matar is the beautifully written story of his desperate search of over 2 decades of his father, Jaballa Matar, an anti-Qaddafi dissident kidnapped with the conivence of the Egyptian secret service and brought to Libya where he probably was murdered.
Part of the book is dedicated to retell the story of Libya through the personal histories of his family members, starting with the grandfather who fought against the Italian occupation, and continuing with his uncles and cousins and father. If he would have lived in a 'normal' country, he would have been part of a political family, but instead, once back to Libya after most of his life spent in 'exile', he is searching for traces to re-create the last years and even moments of life of his father. In those moments, he is no more the journalist and the well-balanced and factual journalist, but a child searching for his memories, searching for his father and building the relationship with him again and again through the despair of knowing that despite all the political activism and desperate searches from the last years, he is dead and it is almost impossible to know about his end.
The memory lane has ups and downs, it repeats itself, sometimes the same memory taking completely different shapes. The memory re-writes over and over again the past and the present. Those fragments of the memoir are directly personal, slow, reierative. More than once I couldn't wait for the factual information, also because I felt overwhelmed by the proximity and the impossibility to see a way out of the labyrinth.
Those who grew up, even for a short while, under dictatorships can easily relate to the stories. Those who are reading it and never encountered other than democracy, might take notes and understand to praise their freedom gifts much better.