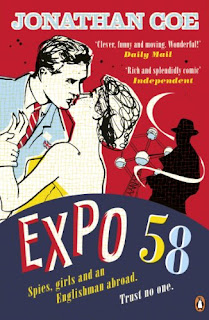 Thomas Foley is the Cold War, UK bureaucrat version of The Man Without Qualities. Minus the usual soul unrest typical for Viennaise characters. Sent to manage the Britannia inn at the EXPO 1958 in Brussels, the first after the end of the WWII, he is faced with a completely new reality and challenges, compared to his usual life back home: with a 9 to 5 job, a wife and a small daughter, an uneventful routine-based existence typical for almost 90% of the world population.
Expo 58 is something different, and as someone who worked herself to such a grandiose event, and keep a small track of literary representations of international exhibitions, I reckon that this is an interesting source of inspiration, well described in the book. For a limited amount of time, people from all over the world are gathering to work and know each other, more or less intimately. At the end of the show, everyone is back to the home reality, and this is how world goes round.
Against his will and without any warning, Foley is caught into a hilarious net typical for that time of the Cold War. There are two spies looking exactly as spies and talking as someone might expect spies are talking, at least if you had enough James Bond bibliography. But there are also people that might look completely different than their appearance display: like the KGB spy versus the attractive American counterpart. Foley's role, which even working at a public institution in a country involved in the Cold War diplomacy and daily invisible war, he is greatly unaware of the geopolitical challenges, is not even to report - as every space around him seems to be bugged - is of low level, to flirt with a girl. One of those 'patriotic calls' simple citizens, otherwise completely un- and a-historical, might be called to do in special situations, like many of the events branded so during the fierce Cold War years.
What I've found really entincing intellectually in this book is the subtle second plan game between reality and appearances, text and subtext and context, about how we remember and read facts versus how the naked facts really are. Once you discover this layer of interpretation, the book is getting a completely different perspective and value.
My only annoyance with the book was the obsessive use of 'old man' by more than one character. Regardless the original meaning aimed by the author, if any, it doesn't bring in my opinion anything good or hilarious to the story.