Book Review: The Women in the Castle, by Jessica Shattuck 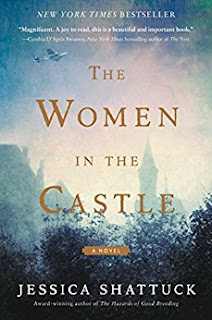 In a Germany brought to ruins by its abuses and paranoid dreams of grandeur, three women - Marianne, Benita and Anja - and their children are getting together their broken fragments of their lives in a Bavarian castle. Their husbands were part of the von Stauffenberg plot and therefore killed and the good deeds and honour of their husbands is their ticket entry into a world free of Nazis.
Once the story develops, there are secrets revealed not all of them convenient, in a country where not few of the people are hidding even more terrible stories of abandon of the basic human values and behavior. It is a world of lost souls and orphans, of people that will need decades to realize the historical pain and trauma created during those terrible dictatorship times. To describe those years, Jessica Shattuck found the right pace and wordings, and more than once I've found myself able to imagine that I am in the middle of the devastated Berlin or in the then Bavarian wasteland. The three women in the castle are a match that probably in real life would be hardly working, but the 'resistance' their husbands were in - at least two of them - and the post-war hardship creates different human solidarities. Their children, although experienced at different extent the same reality, are able to build a completely new world, interacting with that of adults, but without affecting them significantly. Children, they do have the rare art of coming along with the most unusual situations and deep loss.
An interesting direction of the book is how the characters do deal with the current historical events, not necessarily in terms of the deep moral meanings, but for starting anew their life. Marianne, for instance, refuses to give credit to the blind actors of the history, while Benita 'held no reverence for anything old or historic. History was horrible, sloppy tail of grief. It swished destructively behind the present, toppling everyone's own personal understanding of the past'. For Fritz, the former German prisoner, 'shame was the only right way to live'. However, there is the assumption that under the impact of history, the individual might have little choices, therefore the difficulty of assigning guilt.
I personally found the late post-war years experiences of the characters a bit too simplistic, with most of the characters going to America to start a new life in the country of the liberators. There is a certain unbalance in the narrative, not necessarily entincing, with the moral issues softened for some details about American comfort. I've also found a little temporal glitch, with a contemporary reference to the suits of Angela Merkel in 1991, when she was for sure a less known personality.
The Women in the Castle is a book which raises questions and creates moral dilemma with some realistic insights into the issue of historical guilt and responsibility.