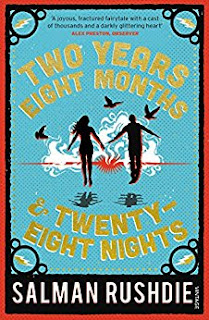 Every encounter with the literary world of Salman Rushdie is a storytelling feast. Told in the slow-paced Oriental tone, his stories, often turned into novels are journey into the deep layers of imagination, freely playing with universal symbols and philosophical meanings.
Two Years, Eight Months&Twenty-Eight Nights - mathematically 1001 nights - is an equisite magic adventure into the world of djinnis and their interactions with humans, a panoramic story of human grandeur and decadence.
I've recently read a novel writing advice according to which it is preferable that you are roughly limiting the number of characters populating your story. Rushdie proves that he is able to have an infinite number of them, and to infuse them with life, will and adventures of their own. The number of stories included into this story is like a mosaique of fractals, a charming chain of stories that are taking the reader in without acknowledging.
When you are reading some of Salman Rushdie books you are reminded about that high end society of hommes de lettres of the old centuries, when putting words on paper meant more than creating spontaneously stories, but creating meaning and giving a violent, debate-oriented life to the ideas. Although the setting was an Oriental big table where characters are coming and going, the content of the writing reminded me of both Saramago and Russian literature - Bulgakov, among others.
If at the end of the novel you keep asking yourself: 'What the author meant in fact?' without finding a clear answer is also because we almost forgot how to approach perfect literary worlds. Writers do have extra powers to read the world and re-write the story of reality for us, and Rushdie is one of them. The rest is a hard work of imagination.

Rating: 4 stars
PS: Can't wait to read a review in the next weeks his latest book The Golden House, received from Random House Publishing Group via NetGalley.
Posted by WildWritingLife at 01 November