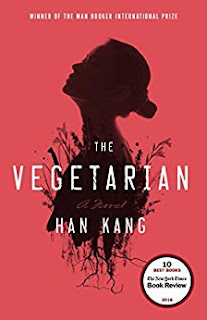 The Vegetarian by Han Kang is an unforgettable, very emotional and heart-breaking novel about identity, sense of the body and unbearable social pressures.
Yeong-hye is a 'completely unremarkable' woman, with a husband, a lot of home chores, a freelancing job. In the novel, her voice is hardly heard, if ever, as the story of her dramatic change since her sudden decision of becoming vegetarian is told by her husband, her brother-in-law and her sister. Everything started when based on a terrific dream, she decided to give up meat, in a society where being a vegetarian seems to be an outrageous exception. But it is the only way Yeong-hye is taking back her body and her life. The more she is pressured to give up her choice, including in a violent way by her father, the symbol of how males might request in traditional societies that their desires are heard and followed accordingly, the more she is turning into a kingdom of silence and refuses food. Any kind of food in the end.
The choice of Yeong-hye might look absurde and narrow minded - after all, you can escape social pressures in more subtle, middle-of-the road ways, but it is an ultimate scream of freedom. It is the pure freedom of requesting the right to decide of your rights and wrongs. It makes you think completely differently of your personal and social limits, those accepted because no other apparent options. It is a novel that haunts you long time after you finish it, because it is so accurately describing feelings and personal torments of a woman in a world submitted to the will of men.
My only reason for not giving 5 full stars to this novel is that as someone who went through a - luckily short and pretty manageable - anorexic stage, but with close family members having to cope with it for long years, I am still not completely convinced - or refusing to believe it - that refusing food is more than a hard way to punish yourself.

Posted by WildWritingLife at 28 November