Book Review: For Today I Am a Boy 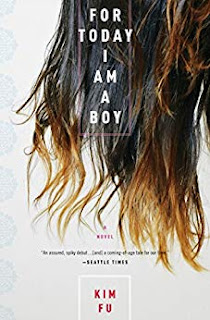 For Today I Am a Boy is probably the best book about transgender identity I ever read. It is one of those books that open your eyes and the mind to a world that you weren't aware of before, in a very swift, literary, non-ideological way, and it is what it means for me to write good books.
Peter, the character of the book, belongs to a Chinese family of immigrants. His uniqueness as the only man-to-be in a family with other three girls is that he actually doesn't feel as a boy. 'Boys were ugly and foreign, like another species. Like baboons. I was not one of them. The evidence was right there, all the time, tucked into my tight underwear, but I still didn't believe it. I didn't have one of those things, that little-boy tale of flesh'.
Peter's personal history is intertwined with the identity interactions with the father and the challenges his other three sisters had to deal with in their adult life. Although from a stable family - except the father who had a white lover - all the kids ended up unmarried and at a certain extent unhappy. The tyran of the father who forbade the mother to speak Cantonese or cook original Chinese foods, dreamed about his children being lawyers and doctors. 'When I realized Father wasn't with her (the mother - WWW), I took her to a dim sum place inside a mall in Chinatown'. The image of the Father - always with F - is overwhelming, fearful and affects in a Freudian way the development and emotional development of the siblings. They all looked so perfectly normal from outside!
Peter's identity is evolving slowly and sometimes he seems himself not so sure about what he really is. When meeting other trans that not even were supported by the family to change their gender but open about their life journey, he refused to acknowledge it, because it seemed like he wasted his real life hiding and containing his feelings: '(...) you couldn't just rename yourself, you couldn't tear down the skyline and rebuild and think there wouldn't be consequences'. His gender identity is growing up slow and it is the new perception on gender and most generous - although not perfect space of expression which is speeding up the process.
Kim Fu created a beautiful, well-told story to express so many different feelings and life episodes and milestoness. The characters don't leave you indifferent and most of them make you think about them long after the book is over. I've personally found the mother, with her silences and repressed identity, a very interesting figure, representative for her generation and the perception of women in family and society.
For Today I Am a Boy well deserved the accolades received in the media and set a complex standard in terms of trans-related literature. I will probably read other books my Kim Fu too as I noticed a gentle way of approaching life which appeals to me.