Nairobi Heat is more than a simple thriller about an investigation taking place between USA and the African continent: is about coming home or rather longing for it, about tragic histories and pathetic human weakness and the relativity of good and evil. 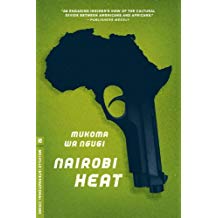 Ishmael is in charge with discovering who is the blonde girl found murdered on the footsteps of the house of a famous Rwandan war hero. Following an anonymous call suggesting vaguely that the answer might be in Kenya, he is taking the first flight and starts a counterclock investigation. (Honestly, I doubt that bureaucracy is so weak in the States that you actually can convince anyone to pay the cost of a trip based only of a very unclear hint). What Ishmael will find there is enough for a lifetime: he fell in love, is always challenged to define his own identity as although Black himself he is obviously took for a mzungu - a white in local slang, is dangerously entering a spider web of corruption, crime and genocide guilt. Killing is a local sport, life does not count when even a little amount of money is involved. Good sensitive people are in fact with a black heart, individuals only looking to steal a little bit to survive. And survival is differently defined from a person to another.
The thriller is following its program and so do the human stories behind the characters. The multiethnic and racial divide both in Africa and America are hunting Ishmael. In the USA, the fact that he was a 'black cop arresting black people' cost him his marriage, but in Africa, black people killed millions of other black people based on an assumption of theoretical race purity. When it comes to corruption, it does not matter what is the colour of the hands the money are exchanged through.
At a great extent, the background - corruption, deep wounds left by the Rwandan genocide - is predictable and unpleasantly stereotypical and although the thriller story has some interesting twitches it is relatively secondary in my opinion. What I personally found interesting was the human dialogue and philosophical suggestions which are really a great topic of discussion about identity and human nature in general.

Posted by WildWritingLife at 26 August