The Trap of Tradition in Challenging Times: Home Fire by Kamila Shamsie 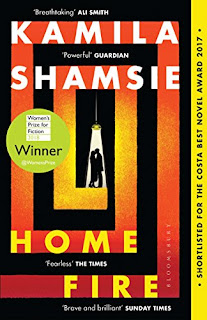 Although my strong black-and-white opinion that a terrorist remains a terrorist and there is no excuse or mercy for the fanatics killing in the name of a religion, the ideas revealed through the characters and events in Home Fire by Kamila Shamsie added a lot of nuances and angles to the discussion. And this is what good books are all about: raising awareness and changing the direction of sight through words.
There are plenty of ideas and even more questions about Muslim identity and challenges of citizenship, assuming responsibility and the relative choice between good and evil. Should terrorists with double citizenship still considered citizens of a democracy they aimed at destroying through their acts? Is terrorism a kind of pandemic, which might be transmitted from father to son? What is the impact of terrorist activities on families? Should the members of the family considered accountable for the acts of their relatives? What loyalties should come first: family or state?
The life of the main characters in the book - the siblings Isma, Parvaiz and Aneeka and the family of the 'Lone' Wolf the newly appointed Home State Secretary - are pending between tradition and modernity, adapting their cultural and religious habits to the democratic frame, rejecting democracy altogether or religion. Their interactions and discussions are displaying different shades and nuances of what are the challenges of Muslim identity, but personally I think that finding the right balance between tradition and modernity, particularly adapting traditional ways of dressing and behavior in the modern world is specific other religious identities too. This observation by Auntie Naseem in the book outlines those aspects: 'In my days, either you were the kind of girl who covered your head or you were the kind who wore makeup. Now everyone is every thing at the same time'.
The challenges facing the second or third generation of immigrants are relatively new, especially to the Muslim minorities in Europe, facing the interaction with modern, rationalist state settings only in the last decades. What does it take, for instance, for being the member of the British government as a Muslim? Should the person in charge with this position be completely against his religious background? (Ironically, Kamila Shamsie created a Home Secretary with Muslim background that will be later a political reality)
From the literary point of view though, I've found that despite the rich ideological and philosophical background, the characters are very often lost in the intricacies of the story. You may know their thoughts on certain issues of interest for the story, but the chance of knowing them as complex humans is very limited and they are very fast abandoned for switching of to another character which may be more or less raising similar issues.
Home Fire by Kamila Shamsie is an important book for those interested in an in-depth knowledge of the last decade intellectual discussion about terrorism, civil liberties and religious and democratic identity. I would personally be interested to keep reading more books, especially literature, about those challenges.