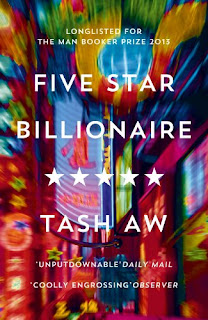 'That's what happens in Shanghai. People say it's the size of a small country, but it is not, it's bigger, like a whole continent, with a heart as deep adn unknown as the forests of the Amazon and as vast and wild as the deserts of Africa. People come here like explorers, but soon they disappear; no one even hear them as they fade away, and no one remembers them'.
Five characters: Phoebe, Gary, Justin, Yinghui and Walter Chao. One common treat: been born in Malaysia. One destination: Shanghai, the big city of all wonders and wanderings. Born more or less under a lucky star - mostly not - aiming to forget their past, hoping to build a new future.
In Five Star Billionaire, Tash Aw created a captivating story made of life stories. The destinies of each of the characters may intertwin at certain moments of the story and all of them might be blinded for a little while by the glamorous city lights. The characters are all tragic in their struggle with their past(s), illusion of recreating new lives and destinies, when in fact they might follow a well beaten destiny path. Even when they are on the top of their career and finally welcomed by the sophisticated Shanghainese elites , the characters are unable to escape their past, and the weight of the past will finally take its toll. Some might resist and turn this old obsession into a new creative project some might simply buy a one way ticket back to their country.
Besides creating captivating human stories, Aw has a special art of creating ambiances, with a cinematic precision. Words are powerful enough to paint worlds and settle photography-like moments.
The literary work is based upon various researches on studies not only about corruption in Malaysia and China, but also in issues related to foreign workers and other sociological aspects facing the New China and this part of Asia in general.
I've personally found hard to say good bye to the book. The story was becoming so real - that perfect mixture between an interesting socio-political part of the world made alive through an unique storytelling - that I was simply expecting to see more episodes from the lives of the characters. The way in which the book ends is not perfectly satisfactory - some endings were predictable, some not, but it is completely in sync with the specific behavior of the characters.

Posted by WildWritingLife at 18 August