Memories of a Diplomatic Wife: Vodka&Apple Juice, by Jay Martin 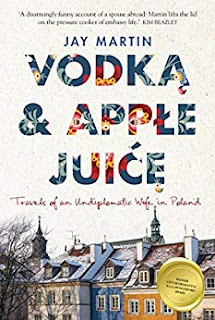 It happened often lately to have on my reading list memoirs written by wives of diplomats, sharing their impressions, frustrations and challenges of their life abroad. Trying - often unsuccessfully - to cope with the liguistic barriers, the sadness of being taken away from their jobs and former social and family responsibilities, with their marriage in a limbo. Maybe it should be created soon a new literary category of 'diplomatic wives memoirs'. At least, they lived to tell the story and almost created a special genre.
Jay Martin's memories of her 3 years accompanying her husband during his diplomatic assignment in Poland on behalf of the Austrialian embassy doesn't differ too much of previous works I've read. Wives able to write a memoir - and even knowing the local language - are obviously a step and a half further than the frustrated housewives spending their time calling their friends and relatives at 'home' and hardly going out of the appartment and appearing at embassy events only to complain about their precarious expat life. But besides the literay add on, the experiences as such are overwhelmingly boring. We all take decisions in life, some bad some good, and we need to get the best of it. More than one episode about the diplomat of husband coming back home early in the morning after spending the night who known where doesn't make it as a story for me, unless there is really something interesting that happened during this time. Or the wife reacted somehow, or whatever can be relevant to a story you share with the world...
But besides adopting a worn out perspective on diplomatic encounters and daily life - 'Poland is cool. It's just that my life here sometimes seems like an endless round of cocktail events with complaining expat wives...' - Jay Martin really used her experience to get the best of it. She went all over the country, revealing travel destinations unfortunately mostly unknown outside the country, learned a language known for her relatively high level of complexity and explored Europe and even the badly famed Kaliningrad. Those part of the book are the best and I really enjoyed in their fullest, before another couple of pages of complaining and experiences of couple alienation.
Would I recommend this book? Yes, if you are interested in European and particularly Polish history and if you are a diplomatic consort that would love one day to write a better memoir.
I personally liked the cover - joyful and appealing to someone curious about Poland and with a call for wanderlust.

Posted by WildWritingLife at 05 August