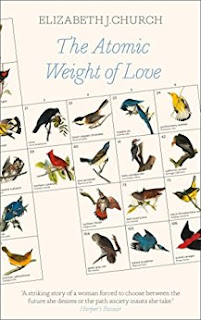 Love comes in different shapes and weights. It can be easy as a feather or heavier as a pile of books, it can bring freedom and happiness and a new life, or it can hurt the heart deeply the heart and bring it to chains. In this exceptional debut novel, it seems that everything has a weight and you can even feel, at least at the beginning of the story, how words and feelings and objects are just flying from a part to the other of the page, in a blink of a thought.
Meridian is a promising scientist whose life is supposed to be a dedication to intellectual journeys. She hopes that her encounter with Alden Whetstone will push further her dedication for science, particularly ornithology. She accepts to marry him while finishin her BA, but she will have to put on hold indefinitely all her scientific dreams for a life together with her husband in the community of atomic scientists from Los Alamos. She keeps studying crows aiming that one day she will publish her thesis, but this will soon become a kind of hobby and a distraction from her housekeeping duties. Love changes into resentment, routine is as heavy, even the crows will disband and leave the colony. Years are passing and Meri is nothing from what she dreamed of. She will have an adventure with an ex-Viet veteran hippie that will bring her closer to her real self, but she is not strong enough to leave everything behind and follow him to Berkeley. They will keep in touch through letters without meeting again, until the end of her life.
The lifespan of the protagonists crosses dramatic evolutions in the contemporary history: WWII, the atomic bomb, Vietnam war, the flower power movement, the pressure towards more rights to women, including the right to vote, the television. The historical background is probably the weakest part of the book, with a relatively low reflection of the times in Meridian's life, if not through the observations and mentions of other people part of the story. Does she not read a newspaper, at least?
Wish Meridian was strong enough to leave love and chose science. This is what effectively annoyed me in the first part of the story, when everything seems to settle into a self-destructive routine when year after year passes without any counter-reaction of her side. Other women at Los Alamos, more educated than her, did the same: left behind any dream of professional achievement to follow their husbands. A marriage of minds looks as uneventful - plain boring - as when other considerations matter in chosing a mate.
The raw realism of this book is that it shows how actually women had to life for most of the human history, and our boldness and courage to pursue a career dream, with the price of loneliness and singularity still remains exceptional.
A well written book, with an exquisite knowledge about the world of birds - each chapter is accompanied by a specific bird whose symbol and short behavior description is the motto - that is more than a feminist pledge. It tells a particular story and it does it well.
Rating: 4 stars
Disclaimer: Book offered by the publisher via NetGalley.com
Posted by WildWritingLife at 21 August

Email ThisBlogThis!Share to TwitterShare to FacebookShare to Pinterest
Labels: 4 star books, book reviews, bookish recommendations, elizabeth j church, the atomic weights of love, what to read, what to read this summer