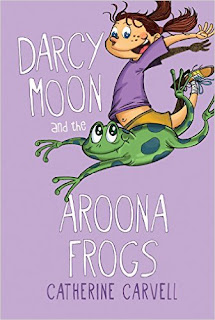 Darcy Moon is not very happy with her current life. Her hippie parents are too eccentric to be seen with in public. The life she is living at home does not have the usual amenities the other children in her class enjoy, such as TV. She is not popular and her budget is usually limited.
Everything is deemed to change one night when she stumble upon some frogs - after a day out in the swamp with her father gathering worms - who need her help. Why her, out of all the other human beings in the whole world? Because, upon her birth, she was secretely given the mission of being an Earth Guardian. It means that she has some extra powers that can be used in special emergency situations. The situation of the frogs from Aroona Wildlife Reservation is anything but normal. Night after night, the frogs are mysteriously disappearing and the whole wild life balance is in danger.
At first, Darcy refuses the savior's mission - she has enough of out of order situations and talking frogs is not what she needs to deal with when there are so many problems to cope in her everyday child life - but after learning in school about wildlife and its enemies, she changes her mind. At night, she run away of home secretly to join the frogs. Just in time to catch the one and only who is guilty for the dissapearance of frogs. A multi-rich local personalities, the creator of a very successful chips brand needed the frogs as the secret ingredient of his potatoes.
Through a special rescue mission, Darcy suceeds to save them from extinction but it remains to reveal the perpetrator to the world. This will happen a couple of hours later: a role-model presentation he was supposed to hold in the front of the children from his former school ends with a frog invasion, during which he is showing his first colours.
After so many adventures, Darcy is really happy with her lot. So what if her mother doesn't wear a bra or her father doesn't use a deo? She've found herself and she does not have any reason to be ashamed of what she is now.
I loved this book from many points of view: the writing is entertaining and dynamic; the story is inspiring; there are many lessons learned about nature and relationship with peers and parents. Last but not least, I also liked the illustrations.
Recommended to curious children with a love for nature and ready for a reading adventure!
Rating: 4 stars
Disclaimer: Book offered by the publisher in exchange of an honest review

Posted by WildWritingLife at 10 August