Deciphering the puzzle of The Cairo Affair 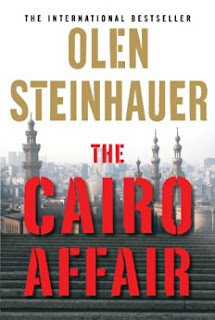 In  my opinion, a good spy novel is when at the end of the first half of the book everything is even more blurred than at the beginning and the truth, if any, is revealed only in the very last pages of the book.
The Cairo Affair is such an example. For me, it was a real page turner as I was more and more impatient to find out what was actually going on. But I had to wait another 100 of pages in order to discover it. A spy affair at the US embassy in Egypt, in the confused days of the "Arab Spring", that started during the Balkan wars and continued with the killing of an American diplomat in Budapest. It is an intricated game of lies, denial and hidden truths, when the movement to topple the Libyan dictator Muammar al-Gaddafi meets the Serbian mafia. Impressively, the author is very familiar with many details of both the Balkans and the Arab turmoils, as for instance the fact that pro-democracy activists in Egypt used the example of the young anti-Milosevic Otpor militants from Serbia. The entire political and social context is accurate, which gives more authenticity to the fiction story as such.
A merit of the book is that avoids the temptation of using conspiracy theories and other kitsch fireworks that many spy and thriller authors use just to win easily an audience. Rather the opposite, it shows the normal weaknesses of the American power and of intelligence in general. In the words of the CIA chief station in Cairo - in the book -:"Intelligence is a pseudoscience, like astrology. Sometimes the outcome seems to prove that your methods and techniques are infallible. Other times, it proves the exact opposite".
However, I found some flaws , especially when it comes to the character of Sophie Kohl, the one who actually puts into movement the all intelligence row and who, innocently sold American secrets in order to save the skin of her husband for a dark episode from the times of the Balkan wars. She is portrayed as the perfect victim for such a blackmail - in fact, the secrets were sold to the Egyptians and leaked to Gaddafi, not to the Serbians, as she assumed - but sometimes she behave too stupidly that her husband would have pass the basic security clearance. For instance, the meeting between Sophie and Zara Balasevic, her Serbian handler, in Cairo, was quite pathetic and does not have anything to do with intelligence, although can offer a couple of explanations for the treason.
In the writing style category, the action descriptions are very good, with the right choice of words to create both suspense, bringing the reader as part of the action.
As for now, I am looking forward to read more books by this interesting author.
Posted by WildWritingLife at 07 August