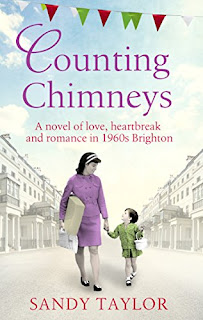 At first, I was curious about the choice of the time set of the novel - the 1960s - but shortly after I realised how interestingly the author explored this era. This is the time when girls dream to marry Paul McCartney, relationships evolve and the choice of living as a couple together without being married is about to become a high occurence and when women are considering having a career or just staying single. Those where the days.
But always people fell in love or out of love. Dottie Perks tries to run away from the ghosts of her past as far as London, but for years after she realizes that her heart still belongs to her childhood beau, Ralph. But he is the single father of a daughter with her best friend, that died - the reader will realize - in a previous book (this is the second installment that starts with The Girls from the See Saw Lane, but anyway, you can still understand most of the story without reading it). Despite his weaknesses and even cowardice, as he run after Dottie the day he was supposed to marry and move to Australia, only to finally relocate there due to the conflict between Dottie and the little girl, the love stays strong despite all odds and disappointments, and even betrayals. Some strong feelings are bigger than life. And when things look bad, just 'look up and count the chimneys' as the interesting character of Rose adviced Dottie in one of her darkest times.
The dialogues between the characters are well crafted and despite the ongoing drama unfolding most of the time, there is a pint of humour and hope too. Both the topic and the writing are transporting the reader into the world of the book in a complete way. I ended up not only betting about Dottie's choices but you end up but either loving or hating or just disapproving deeply some of the characters.
Her final choice might be problematic, but is the decision of an independent character that you cannot stop admiring.
Rating: 4 stars
Disclaimer: Book offered by the publisher in exchange of an honest review
Posted by WildWritingLife at 29 August