Harry Potter and the Cursed Child: The pros and the cons 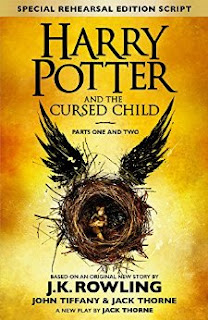 I was a very big fan of the original Harry Potter series, that I've read in a fast-forward mode, in just a couple of weeks, many years back. I loved the writing, was caught by the story and until the end I felt as a very part of it. It has all the ingredients of a cult book, and has many interesting ideas for not-so-younger adults about the fight between good and evil and the limits of magic.
I did not plan to read the newest Harry Potter installment, but this Friday I've found the book available to loan at my local library so I haven't think twice before taking it at home. In just a couple of hours, I was done. I wanted to wait some time before starting to read the review, due to the mixed impressions generated by the book.
The story follows the 40-year old Harry Potter, bureaucrat, head of the Department of Magical Law Enforcement. Father of three, he is married with Ginny, editor of the Sports page of The Daily Prophet. The troubles are back into his life after his son, Albus, freshman at Hogwarts, is about to challenge the whole Harry Potter story as we know it, after stealing and using a Time Turner to correct an episode from the old history. Overwhelmed by the fame of his father, Albus is having his Oedipian moment, that will be overcome, after some emotional and suspense episodes.
I haven't read any previous reviews about the book before and wasn't sure what to expect. The result is a mixture of impressions, as such:

- The quality, flawless writing. Adapted for a play, it has many visual moments described by well-chosen words strong enough to create an accurate image. Like, for instance, the functioning of the Time Turner: 'And there is a giant whoosh of light. A smash of noise. And time stops. And then it turns over, thinks a bit, and begins spooling backwards, slow at first...And then it speeds up...'. Based on this description, you can imagine how it works as you are about to start your journey through time.
- The continuation with the other books from the series is made smoothly, with small details brought elegantly into the story.
- There are many events and surprising twists that keeps you interested until the end of the story, although there are some dull moments, particularly in the first part. The relatively peaceful and uneventful pages - like for instance, when it is about the discussions at home between Ginny and Harry, not too much magic here, sorry - are followed by some small or big events. For instance, the talking books suggesting a riddle, or the pumpkin pastry turning into a grenade.
- I definitely love the idea that things are meant to be and not even the good intentions or the time travel can change them for good. Things happen and you cannot do anything against it. Realizing this is Albus growing up moment.

- Why writing a play and not a real story? Why? Why not a cartoon, or a poem...If you are a real Harry Potter fan I think you just may feel betrayed because instead of a long eventful story, you are left with some short scenes and action sequences...I understand that there is a play in London and this is how things were chosen to be, but still, I would have prefer a big story with details and a larger scenario.
- Harry Potter is so worn out in this sequence...At 40 he behave just about to retire, like an annoyed bureaucrat, predictable and too self absorbed to pay attention to the emotional needs of his children. It doesn't make justice to the original character at all. Thanks to the apparition of Dumbledore he is guided into his mission as a parent: 'You're supposed to teach him how to meet life'.
- The story is disbalanced, with an almost boring to tears first part and a very eventful second one. The format - play - may be guilty for this discomfort.

The conclusion: If you have some free time one afternoon, read the book. But don't expect too much and just keep in mind that it might be very different from any of the other Harry Potters.

Posted by WildWritingLife at 13 August