'10 Minutes 38 Seconds in This Strange World' 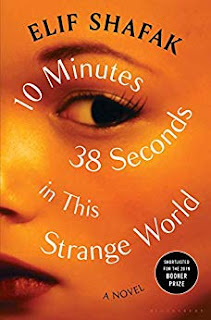 'Istanbul was, and would always remain, a city of impromptu spectacles and ready-made, eager spectators'.
10 minutes and 38 seconds after her body was dumped in a garbage bin in the outskirts of Istanbul, Tequila Leila reminds her life. Her heart stopped beating, but her brain is still working and is intensively involved in recollecting the most relevant episodes of her existence.
Tequila Leila is a sex worker, an outcast that left her native Van fleeding sexual abuse, lies and a dysfunctional polygamous family - a house 'full of lies and deceptions'. Her memories are made not only of people, but of vivid smells and tastes, the testimony of a life lived fully, although from the margins of the society.
The actions are taking place in the 1960s-1990s, and the political context - both local and international is following shortly the personal story. No detail is accidental - including the fact that the main hero was born in Van, an important benchmark on the map of the Armenian genocide that Turkey adamantly refuses to ackowledge - and the similarities with the changes the Turkish society underwent in the last years are obvious: religious intolerance, suspicion against intellectuals, aggressivity against minorities and foreigners, particularly refugees.
Even when she is talking about the sexual abuse she was the victim of as a small child, Tequila Leila doesn't let hate prevail. The beautiful storytelling of Elif Shafak is there to remind the power of human deeds and friendship. Leila's five long time loyal friends will try to get her out of the Cemetery of Companionless and eventually bury her near her revolutionary husband D/Ali. The comical turn of a tragic event as well as their dedication to Tequila Leila's memory are the best answer to the everyday violence that took over the streets of Istanbul.
The story might start with THE END, but her life will be remembered through her friends and then, there is no end.
This is the power of storytelling, to bring beauty and eternal consistency to the fragility of life in this strange world.

Posted by WildWritingLife at 20 February