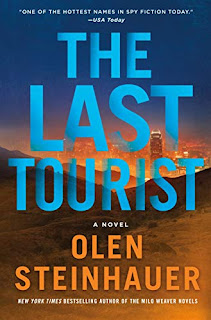 The impact of the post-Cold War and post-9/11 to the intelligence community and challenges are hard to fathom. Those changes still in the making require a completely different knowledge and type of personality to deal with.
Olen Steinhauer's books are often opening windows into both the old and the new worlds, with both sides of the coins revealed. The Last Tourist, forthcoming the 24th of March, is the fourth into the Milo Weaver series, following octopus-shaped connections of money and corporate interests from West Sahara to Davos.
There is a world in the making that the tourists - CIA-trained assasins - are molding, together with other groups of interests and overnight powerful individuals. The human relationships - family ones particularly - are desintegrating and sometimes replaced by cruel survival instinct. Ethnic identities, nation-states or languages are no longer sources of power but the corporations and results of mergers and acquisitions.
The world the characters of Olen Steinhauer inhabit does not have any hint of nostalgia, it is described as simply and realistically as possible.
Maybe the action as such in this book is not so breathtaking, at least not for my taste, but what was fascinating for me was the dynamics between characters. The majority were motivated to join secret societies and intelligence offices in order to search the hidden knowledge enabling to understand how the world really function. While searching, they've found though different meaning and fragments of truth that further shaped their course of action. Nowadays, there is no more a single truth and reality is multiple and often depends on the viewer's interests,
The Last Tourist is a really interesting thriller, for both the writing and the actuality of the topics featured. It might make things more blurred before they got clearer but it's worth the intellectual suspense.

Rating: 4 stars
Disclaimer: Book offered by the publisher in exchange for an honest review.
Posted by WildWritingLife at 29 February