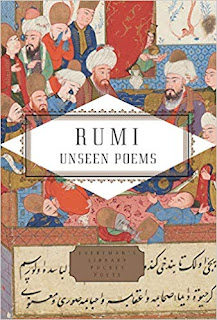 The 13rd century Sufi mystic Rumi is enjoying an outstanding popularity nowadays. During those times of 'me-time', and other selfish excuses we invent to avoid for fully assuming human relationships, some might find refuge in its poetry. Or looking for excuses. Which is wrong.
Rumi is writing about being one and free, but only for joining the togetherness thereafter. Isolation is not for him an act of singular and lonely destiny, but an intermediate stage during which the spirit is getting accustomed with both happiness and sorrow, ackowledge them just to feel further liberated from them.
Many of his poems are easily categorized in the 'Love' shelf, but for me it often refer to a much bigger and stable one, aiming at the spiritual meeting between creature and Creator. More than once, his love poems reminded me of the hidden beauty of Shir Ha'Shirim (The Song of Songs).
Those are my fresh thoughts on Rumi after going more than once through the recently Unseen poems published by Knopf Doubleday Publishing Group last autumn. There is no surprise that many of Rumi published poems are in fact translations of translations which seems to happen often in the case of Persian poetry. I personally own an old edition of Shahnameh by Ferdowsi which I discovered recently was in fact translated from a French edition. The Rumi poems collected in this edition are not only first time published for the English-speaking public but translated from the original Persian by Brad Gooch and Maryam Mortaz.
We need more poetry, more insights and guidance through spiritual life, and less selfishness and mean excuses for a 'safe' life of emotional isolationism. Read correctly, with an open heart Rumi can offer a remedy.

Disclaimer: Book offered by the publisher in exchange for an honest review

Posted by WildWritingLife at 11 February