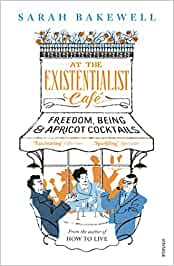 Between 16 and 18 yo, I've breath, eat and read philosophy. Day and night, in all the languages I knew at the time. It was less an 'existential crisis', but rather the sudden discovery of how far the mind can go. It was not my intention of becoming a philosopher or a revolutionary thinker but most of my intellectual development in the years to come owe to those intensive years when the world of thinking opened up to my curious teenager mind. Later on, the contacts rarefied in terms of new information but my thinking is at a great extent anchored in concepts I've acknowledged then.
The existentialists were by far my favorite clique. I become familiar with them long before my feverish philosophical exploration due to family affiliations and the French culture I was naturally connected. Out of the many other schools of thought it made the most sense for me as it offered a way to integrate the abstract concepts into life by effectively living them at their fullest. At a great extent, it reached my expectations in terms of the duality life/thought.
But as in the case of the other abstractions I had to deal to during my adventurous life, soon I will cease thinking about existentialists too because life was expecting me and I refuse to decline its appeal for abstractions of any kind.
At the Existentialist Café by Sarah Bakewell brought me back to those carefree years of my life when my biggest worry was how to get another excuse for skipping the boring regular school for some extra reading hours. Its biggest merit is of pledging for the authenticity and actuality of existentialist philosophy nowadays: 'When reading Sartre on freedom, Beauvoir on the subtle mechanisms of oppression, Kierkegaard on anxiety, Camus on rebellion, Heidegger on technology or Merleau-Ponty on cognitive science, one sometimes feel one is reaching the latest news'.
Through punctilious research on various interpretations of Existentialism in its different languages, Sarah Bakewell documented not only the concepts but especially the individuals that created them. Thus, she broke the convenient tabu for too long imposed in human sciences according to which the personal life of humanists and their work must be separated. Which is so wrong and a superficial solution for hiding under the carpet inconvenient truths about problematic personalities national cultural 'heroes'. Like, for instance, the notorious case of Heidegger whose work and philosophy cannot be separated from his brown past.
The lecture is entertaining, particularly if you are familiar with the works and ideas. Sometimes it's like reading gossips about famous people and not all chapters are equal, but it is good written and made me think to return to some serious philosophy reading. Not necessarily Heidegger, for the record.

Posted by WildWritingLife at 25 February