The Story of an Unexpected Spy 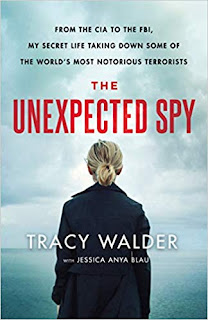 It started in the most genuine, innocent way: a young student passionate about history and politics attended a job fair and left a CV to the CIA stand. Shortly after, she got a call at her sorority house and started the recruitment process that she concluded successfully. At 22, she enters the Agency as a woman, the youngest and often the only woman from teams she was part of.
Woman, Jewish, often bullied in school but other girls, Tracy is resilient: 'ignore them, shore up, focus on what you want to do, who you want to be and not what other people want from you'. Long before she joined the agency, she wished she is able to be part of a context that allows her to change something from this world: 'More than ever, I wanted to be part of the solution to these worldwide and domestic problems, but I couldn't bring myself to admit this aloud'. I dare to say many political science graduates nurture such wishes, but not all achieve them so straightforward.
During that September 11, 2009 she was already part of the counterterrorism staff and had the feeling of a big professional failure for not being able to prevent the terrorist attacks: 'There had been chatter about Al Qaeda's plan to hijack planes, there had been chatter about plans to blow up buildings. But no one in the CIA had detailed information about when or where'.
For Tracy, the stakes are high and she travels often all over the world to cope with the new realities. The cause of her disappointments are not only related to the complexities of the new situations on the ground but also due to the new hawkish American policy directions. And there is something else that seems to interfer with her professional qualifications, especially when abroad: the fact that she is a woman. Intelligence doesn't need to have a gender but not everyone working in the field of intelligence is intelligent.
The worse is yet to come: as she decided to change career and was accepted in the FBI, the sheer degree of sexism and bullying encountered during her training is hard to imagine. But apparently, the order of the day.
Tracy's voice is genuine, avoiding any pathetic temptations. It's rather describing than making personal statements or offering an adventurous account of her life. It is a story of a journey of self-discovery and ackowledging of the reality, including of the unfair limits women had to fight against everywhere, even by succumbing to the temptations of becoming themselves the defender of the mysoginistic injustices.
But Tracy wants to change the world therefore she will not accept this 'reality' aiming at offering to her daughter something different. Therefore, The Unexpected Spy is more than an adventurous account of a lady spy, it is a book about personal experiences and women voices that want to be heard.
The final version of the book was sanctioned by the departments in charge of the intelligence agencies and the sensitive fragments were obliterated.

Disclaimer: Book offered by the publisher in exchange for an honest review
Rating: 3.5 stars

Posted by WildWritingLife at 28 February