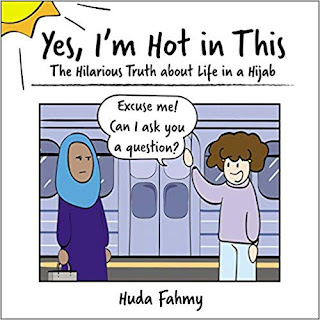 Before I become familiar with the struggles of practicant Muslim women in Western societies to maintain their individual religious choices - I am  talking about the assumed free choices - I knew so well what my religious Jewish friends went through. How can you wear long sleeve during this hot weather? Why are you not shaking hands with a man, it's such an outdated/read primitive/ habit...Whoa' are you wearing a wig? Over your hair...it may be hot for you...And so on and on and on...
What about everyone minding his/her own business and stop asking the triad of offensive and at the limit stupid questions to someone that looks different: Where are you from? You speak English/German/etc. so well...where did you learn it.
Huda Fahmy is one of the few voices that are raising in a humorous yet clear way the everyday stupidity an American-born practicant Muslim woman is going through every day. Her comics are filling the void of the relative lack of representation in the everyday intellectual life and entertainment industry in America and abroad.
'Society made me feel like the odd one out...' her character in the comics say. And it's such a matter of lack of information: she went to law school, married a man she loves, can run a marathon and watch a movie by her own in the movie theater. Despite those signs of normality, she spends a lot of time convincing people she is not a threat and she is more cute than hot.
How people see and interact with her is the result of misunderstanding, lack or manipulation and information but because voices like hers are missing. I love the humour and simplicity of her memoirs and I can only hope that she will create more books on this topic and more voices like hers will be heard.