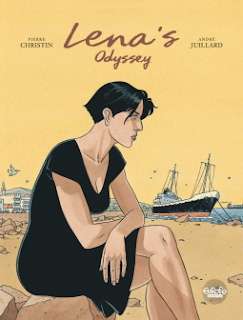 From the villas of the former communist leadership in Eastern Berlin to Aleppo, Lena is on a bizarre mission that in the end we find out it has to do with the peace process in the Middle East. The suspense of the graphic novel has to do less with the aims, but with the ways in which the mysterious story unfolds: we have to follow Lena and her strange way to contact people in as diverse places as Romania, Hungary, Turkey, Ukraine or Syria, who are given unusual presents - marzipan chocolate, shaving kit, expensive perfume. Sounds very intriguing, isn´t it? You should wait until the very end of the story to figure out how those extraordinary gifts will be in fact used.
The suspense is all around and will continue until the very end of the story. Because Lena has in fact a different name and her personal history hence her presence into this story is more complicated than one of a adventurous globetrotter. Her Odyssey, revealed step-by-step is what keeps you reading this exceptional graphic novel in one sitting. It has the right combination between inspired graphics - by André Juillard - and the literary setting - by Pierre Christin - which for me makes the reading of such a genre as valuable as any other kind of literary product.
The book was originally published in French, but I´ve read the English translation.