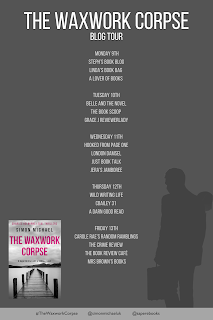 Set in England of the 1950s-1960s, The Waxwork Corpse by Simon Michael is a slow paced classical legal thriller yet with many unexpected twists. 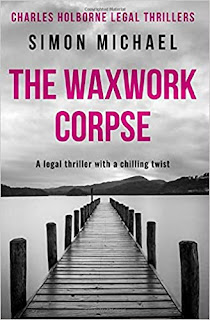 Personally, I prefer novels set in our very recent times, except for some historical novels, but the ways in which the spirit of the old times is inserted into the story in this book are so smooth that one doesn´t need extra documentation or a long time journey. The historical part, which goes as far as the 1940s, during the bombing of London by the Germans is used as a useful background but there are no historical specificities besides the specific context as such.
The story in itself is catching and once I started to read the book I`ve refused to let it down. There were many reasons for that: the writing, the characters, the story in itself that although it has a certain degree of predictability it has unexpected emotional twists revealing hidden human truth, the construction of the story in itself, with its more than one layer of development. Do not expect The Waxwork Corpse to be a reading packed with action and activities and corpses every 2 pages. There is only one corpse whose life and encounters are reconstructed based on the testimonies of people close to her, but the person who did the murder is apparently known from the very beginning.
Charles Holborne, formerly Horowitz, a former boxer with a shady past, an unusual yet respected barrister, is prosecuting another barrister whose wife, disappeared for over 10 years, was finally discovered in the Lake District. That wife was a nasty unbearable aggressive character herself it seems, and probably the barrister acted in self defense, but why it took so long to recognize the murder and why he hid evidences for so long? The final answer will be known only in the end, and it is a surprising one, although following the logic of the story, without a spectacular turn of situation. The barrister will be declared ´not guilty´ although his career will be over anyway.
In parallel with the legal thriller, there is a personal story involving Holborne´s relationship with his Jewish heritage and his family in general which is going on, which in relationship with the thriller development itself gives an unique perspective on the bonding between fathers and sons as well.
The story is based on a real case and the author himself, Simon Michael, was a barrister for 37 years with experience in defending a very diverse category of culprits.
The Waxwork Corpse is the 5th from the Charles Holborne published by Sapere Books. For me, it was the first encounter with this unusual barrister and the fact that I haven´t read previous books from the series did not influence the understanding of the current book. However, I realized that I love the writing so much that I may be interested in exploring more of Holborne´s adventures.

Disclaimer: The book was generously offered to be by Sapere Books in exchange for an honest review, but the opinions are, as usual, my own.
Posted by WildWritingLife at 15 March