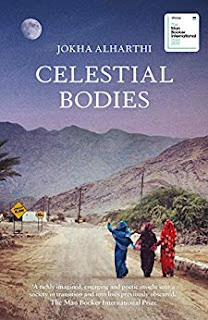 The first book written in Arabic winning the International Booker Prize, Celestial Bodies by Jokha Alharthi is a multi-layered story of three generations living in Oman. The book was translated into English by Marilyn Booth, Arabic expert at the University of Oxford.
On a micro-society level, the book - built on testimonies of different characters - covers a multitude of aspects: recent history of Oman, the family and social changes underwent in a relatively short amount of time, the slavery heritage, marriage rituals, growing self awareness of women.
'Literature have to be honest', the author said in a recent interview with Hindustan Times, and the characters from Celestial Bodies are unexpectedly open when sharing the intimacy of their stories. The main women protagonists - Mayya, Asma and Khawla - represent three different personalities within the patriarchal system and their interpretations of love and marriage commitment. Their projections of womanhood may differ as their social roles and status are different, but they display a diverse view of gender roles. The identity of women remain strongly connected to the masculine authority, itself on the move. The toxic aggressive masculinity some of the men in the story grew up with it's turning against them and affects on long term their own relationships with both their spouses and children.
The world of women is defined and delineated by men and their absence or disappearance may represent a new beginning, like in the case of Najiya, the bedouin woman: 'Her father's death came as a relief. Now she could truly consolidate her authority over her life, her property and her freedom'. And then there are the many stories of the slaves only recently liberated whose voices are screaming high in the sky: 'We are free. They stole us, and then they sold us! he would scream in the middle of the night, at dawn, in the zar exorcisms: Free! They did us wrong, they destroyed us. Free!'.
I've personally got so much attracted by this book for the unique appeal: it reveals about a country I am not very familiar with by curious to learn out more. Therefore, I might have paid less critical attention to the literary aspects. However, after reading over half of the book could not ignore some important aspects: the timelines of some of the personal stories are confusing and the ullulating of the proverb-maker does not always bring new knowledge to the story; the individual stories themselves are not always matching together puzzle-wise, and not all the voices of the characters are equally heard.
The world described in Celestial Bodies is closed to most of us, but through books and literary encounters we are shared, although imperfectly, fragments of this world. I wish there will be more books by Omani writers, including by Jokha Alharthi, soon.