Locked-Room Mystery for Lockdown Times: Murder in the Crooked House by Soji Shimada 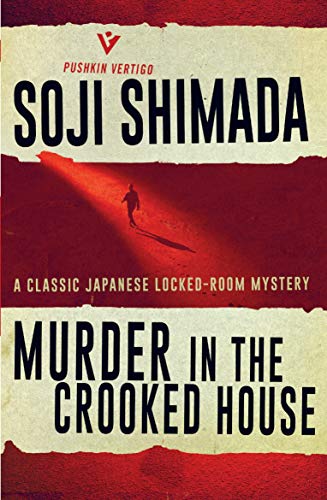 Reading a ´locked-room mystery´ during the lockdown sounds like a decision in full sync with the strange times we are living right now. This specific type of mystery, that Agatha Christie or Conan Doyle and other authors in the 1920s-1930s were very familiar with, are the kind of riddle impossible to solve at the first sight: the murder(s) takes place in a closed space and it seems impossible for the perpetrator to commit the crime.
The crime novel I am about to review is unique for more than one point of view. Murder in the Crooked House is a classical - so-called honkaku - Japanese mystery written by one of Japan´s most popular crime writer in the Asian realm, Soji Shimada. I may reckon that although for years I am regularly updating my knowledge of Japanese literature, I rarely had the chance to read thrillers and mysteries, as this genre is rarely - for ´publishing market reasons´ - accessible in translation. This is the second book by Shimada published in English, the current translation being done by Louise Heal Kawai (that also translated Ms. Sandwich that I previously reviewed). Shimada´s debut novel The Tokyo Zodiac Murders published in 1981 was followed by over 100 words and he is a very popular author Asia. I am very glad that Pushkin Vertigo took this risk and introduced Shimada and his works to the English-speaking public.
Murder in the Crooked House has an endearing structure where the classical format of the whodunnit is filled with typical elements pertaining to the Japanese culture and traditions. While reading, we have to keep in mind that the action is placed at the beginning of the 1980s, in a society that even nowadays has a different approach on social and private interactions. The reader from the 21st century may be outraged by the way in which women are portrayed and their disadvantages - at the limit mysoginistic - positions. But at a great extent, it has to do in general with the women status at the time, that is still a matter of evolution within the Japanese society.
At this context, another aspect to be taken into account is the constant interaction, struggle and friction between the private (ura) and public (omote) constraints the individual has to cope with in Japan. Hence, the duality and mask-like attitude of most of the characters in the book.
Once those little context details were clarified, let´s go further into the book.
The bizarre industrialist Kozaburo Hamamoto built himself a bizarre crooked house in the northern island of Hokkaido. He invited to join him here during the winter holidays a couple of people to celebrate with, more or less regulars, that are challenged to solve a riddle. Then, there is a murder. And another one. No one entered the house. No one left the house. Still, two people who were invited here are dead, the last one while a police team is dispatched within the house. None of the current residents seem to have any reason to kill. Who did it and especially, why?
Besides the residents - alternating, not always nicely and elegantly, between their public/private masks - the house hosts also a strange creature, a Golem, that Hamamoto brought from his trips to Europe. Being relatively familiar with the topic, I haven´t fully agree with the implant into the Asian story, but the cultural and religious details set apart, I may reckon that this element adds some exotism to the story and even might you thing - me including - that he is the culprit. How the crime(s) will be finally solved is in a very unexpected way and worth all the waiting and guessing. Kind of genius as the key to the riddle reunites all the disparate elements spread into the story. Therefore, take all your time to read the book with the highest concentration, paying attention to all the small details, particularly regarding the structure of the house whose plans are drawn in the book as well.
As readers, we feel trapped in the author´s - criminal´s mind. No wonder that the book is structured not in the classical chapters, but in acts, similarly with a play, a decision that outlines in a unique way the idea of a setting-up, manipulating and confusing our minds. This time, for a literary cause so it is worth playing the game for a short while.

Disclaimer: Book offered by the publisher in exchange for an honest review

Posted by WildWritingLife at 30 March