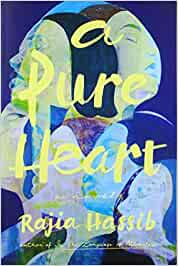 From the turmoil of the Arab Spring of 2011, to sister rivalry, the heartbreaks of immigration and meditation about history and present, A Pure Heart by Rajia Hassib is a story whose echoes are hard to forget.
Back to Cairo from New York where she moved shortly after getting married with Mark, a successful American journalist that converted to Islam, Rosie is collecting artifacts that may help her understand her recently deceased sister, Gameela. An archeologist by profession working at the Metropolitan Museum of Art, Rosie can easily understand and put into perspective the big historical stories of the Egyptian civilization, but she does not have the right mental measurement evaluation for the history unfolding, including the episode that took the life of her sister. Back home, she brought a box full of disparate objects and artifacts, among which she will discover in shock it was a marriage certificate of her sister, an alliance she kept secret from everyone, including her parents she lived with.
Who was really her sister? Does this archeological method really works for real humans? Does it compensate the lack of direct communication that affected the relationship between the sisters for such a long time?
Besides the story of Rosie and Mark feeling in love, which I´ve personally found not so convincing, the stories within the story of the Pure Heart are making strong statements about identity, alienation and belonging. What does it mean, after all, to belong? Should it be a place, a way of being, a person only? Does your place of birth follow you, like a portable box, wherever you go? What is left from those memories - the people, the smells, the things that you miss, the things that you wish you do back then?
Especially when we are talking about the Middle East, the distinction between East and West, modelled by centuries of ´orientalist´ approach is shaping conflictual identities. Rosie, for instance, educated in Western-oriented institutions, prefer a cautious approach to the inquisitive foreigner curiosity, most likely shaped by narrow-mindness and lack of deep knowledge into the culture and civilization. And she will be faced with the same misperception, once becoming an `American´: `Apparently, as an American, I am not allowed to have opinions about Egypt anymore´.
Rosie´s PhD thesis turned around the concept of death as expatriation, based on the tale of Sinuhe. Sinuhe, an official to the royal household, fled Egypt as his life was threatened, and became a Bedoiun. He returned only late in life asking to be burried there, in a symbolic comeback. (The Finnish author Mike Walteri has a book about this fascinating tale, The Egyptian).
Religion and particularly religious practice, was one of the elements that deepened the divide between the two sisters, as Gameela suddenly decided to wear hijab, confronting her middle-class family. But Gameela, as Rosie too, was a woman who assumed her decisions and wanted to do what she wanted. None of the typical descriptions of Middle Eastern women submissive and unable to decide without the men´s approval correspond to the women characters in this book. Rosie. that refused at first to fathom her marriage with Mark because he was not a Muslim, has her own approach to religion, which involved more than the cultural belonging: `Her religiousness, though, was a part of her whole, not the center of her being, and she was happy with that`.
All the threads of the story are smoothly coming together into an unique story. A story about people lead on the waves of events stronger than life.