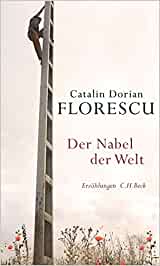 I remember exactly the moment when I`ve heard about Catalin Dorian Florescu for the first time. I used to work as a journalist at the time and one of my colleagues, a passionate German-language reader and learner, which I was not at all, mentioned it passionatelly, outlining his story. Originary from Romania, Florescu used to have a career as a bus driver in Switzerland while writing in his free time. Despite his success, he kept his job, probably as a good source of human information for his stories.
And his fame only get bigger, with more and more books being written and more accolades and prizes being received. Still, it took me over ten years to finally find the proper mood for his works. It might be also because I am always a bit careful, reluctant and distant when it comes to books inspired by and written by authors from the old country. I am not impressed by nostalgic images, mythified memories about the communist times and that attitude that ´in fact, there were also some good things about those communist times though´ (which makes sense from the human point of view and I admit it with my logical/rational part of the brain but don´t want to delve into the dramatic discussion about it).
A couple of weeks ago, I stucked from my local library a couple of books of Florescu, and started to know him through his collection of short stories. The language was fine for me, but he belongs to the Swiss cousins and whose variant of German is often ridiculized. I am not a native therefore I cannot judge the beauty and accuracy of the language, and among my native German friends no one is bibliophile enough to spend reading a Swiss author of Romanian origin in order to evaluate the accuracy. But I have a big doubt that for the natives, those writing in a German taught as a second language are never good enough. Once I had the impression that even bilinguals are not good enough, as a German friend of mine confessed that the way in which Herta Müller, the recipient of Nobel Prize in Literature on behalf of...Germany, writes is not always ´how things are really said in the old German`.
Going further into the content, I entered a world of people at the edge, my favorite kind of people. Immigrants, or locals estranged from life, strange situations and unusual changes, as in the case of the account of the beautiful German island of Sylt suddenly ´invaded´ by Syrian refugees and the reaction of the people used to live in the most expensive part of Germany. The settings as diverse: a border area in Romania, Switzerland, Germany, and the pace of the story shares a lot with the banality of the everyday life. Not the set of events matters, but the ways in which people react to life, their personalities. The stories are told with a quiet, monotone voice, in a way that makes you forget about relative time and geographic limitations, the story flows in its natural realism, then it stops and another one follows. It´s by far one of my favorite way to tell short stories.
I really loved to observe the characters in their failed humanity, and their strength as literary appearances made me very curious to explore a novel by Catalin Dorian Florescu. Which will happen in a couple of days.