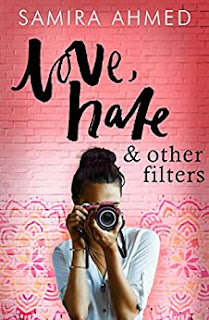 I haven´t read such an insightful YA multicultural novel in a long time. Samira Ahmed´s Love, Hate&Other Filters encompasses with an original voice a clear message about what does it mean to grow up different in nowadays America.
Daughter of immigrants from a Muslim Indian family, Maya Aziz is struggling to write her own story: as a teen, woman, Muslim American, as an individual. She is a couple of months shy of her 18th birthday and the pressures of all kinds are entering her life: her parents - that come with nothing and succeeded to set up a relatively successfully dental practice in Batavia, Illinois - can´t wait to dance to her wedding and already started to tour suitable candidates; it´s time to apply to universities and her passion for film seems to be stronger than the expectations of her parents; she is in love for ever with Phil, that she knows since she was 5, but he is not suitable as a husband material and in addition he is also taken. Maya moves smoothly from a world to another, having non-Muslim friends and coping pretty well with the American melting pot. However, she is born different and this difference is reminded a couple of times every day, from her skin colour to the smell on her clothes because of the ingredients traditionally used to cook in the household. Her parents moved oceans to achieve their current American life, but their adherence to all the cultural norms and standards and self-obliteration is not achievable. Take, for instance, the fact that non-wed young Muslim couples do not kiss before marriage: `The no kiss is anticlimatic, but some taboos cross oceans, packed tightly into the corners of the immigrant baggage, tucked away with packets of masala and memories of home`.
Maya´s biggest struggle is to find the royal path towards a life she wants and fulfills her as a human being, while still being a good daughter. Maybe in a similar with her rebel aunt, in her 40s, not married, a graphic designer enjoying her creativity and freedom. Without acknowledging her parents, Maya applies and is accepted at the NYU for Film studies as her filming ´is the way I see things. Really see them. I can capture what is important to me at a particular moment. That way, I keep it forever´. Which means that she had to leave her parents home and start the life of adventures, in Thoreau´s words she quoted ´suck the marrow out of life´. But announcing such a radical decision involves complex sensitivities and difficult episodes with her parents. ´There are things I love about it. My friends. This place. But I want to be in New York already. You know, a place where I can life and do what I want and not be the Indian girl or the Muslim girl. A place where I can just be´.
Maya´s family Muslim identity appears as a given, connecting the members through the threats of tradition and shared identity: they do not eat pork or drink, but also don´t necessarily go to the mosque all the time and pray strictly five times the day.
At first, everything looks like a cinematically organised sequence of life snaps from the life of a teenage gang in Batavia, Illinois dating, dealing with their family constraints and their burgeoning identity of new adults in the making. But there is another terrible story that rolls in the background, the story of an unhappy young boy that lured by the white supremacist ideas will commit a terrorist attack. First, it was labelled as a Muslim terrorist attack, as among the name of a victims, a certain Aziz - the same family name like Maya´s - was found. Followingly, Maya´s innocence is facing the assault by an aggressive colleague. This is the rotten worm of the beautiful American dream since September 11, revealed as Maya was praying that the perpetrator is not Muslim: ´I´m scared of being the object of fear and loathing and suspicion again. Always´. The Muslim ban and the additional screenings in airports of non-white people, said Maya, ´left American Muslims to fight for their Americanness and their beliefs´. But there is still hope for her; when overwhelmed by the situation, her parents were considering maybe returning back to India, it is the same Maya who is trying to convince them that America is their place: ´Yes, terrible racist stuff happened, but we´re part of this place, and it´s a part of us. And we can help make it better by being here and living our lives and being happy. We can be...We are American and Indian and Muslim´.
The story in itself is full of hope, with delicate twists and change of situation, slow paced yet keeping the reader alert for the new installment. The audience is mostly YA, but it also shows to a larger audience a specific way of understanding and stating identity in America nowadays. In an interview, the author herself who is living in Batavia, Illinois, experienced racism as a little girl therefore the accents of authenticity in the voices of the characters. The characters are authentic not only when they utter realities related to their ethnic and/or religious identity but also as voices of teenage children and adults in the making.
The construction of the story and the ways in which the relationships between the characters develop is another plus of the book; it offers a multiplicity of perspectives and projects the unique voices and personalities of the characters.
Love, Hate&Other Filters by Samira Ahmed is one of those books whose reading is important in those dramatic times for the ethnic relationships in America we are in. As told and seen through the voices and eyes of teenagers, it makes the entire message more relevant because it gives the measure of the struggle for being free enough for writing your own story. That story that´s only yours to live and tell it further.