The right place with the wrong questions 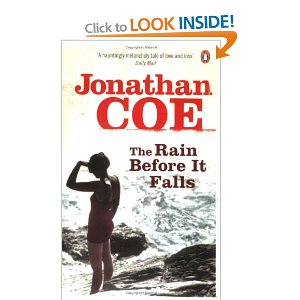 At the beginning of this week, I attended an incredible public meeting with Jonathan Coe. He had several lectures from his The Rain Before it Falls and answered questions about his books and inspiration.
My only question I wanted to address, but I didn't was: How much time he spend doing documentation and how often he feel the need to do it. And, by documentation I am thinking about bibliographical research, but also the direct life experience research you need to better understand a certain environment - blind people, for the case of our book. I was too shy to do it? Not exactly shy, but certainly extremely bothered by the curiosities of the readers from the public - Why the women' characters are so bad? Why are they dying at the end of the story? What is the reason behind using the word "to occur" for x times? In a way, it was interesting to observe the differences, sometimes the gap, between what you want to offer as a writer and what your audience is grasping about your writings. And as long as you decided to publish your words, they are belonging to you only from the point of view of the explanation you may offer about your intentions. Free in the public space, anybody is free now to read and understand them.
I was impressed by Coe' simple way of explaining words: not affected by his status as a creator, very patient in answering questions, very humble and reserved when it was about talking on himself. Introduced by the host as a musician, he insisted to correct this perception, by mentioning that his records were disparate and lacking an impressive record.
From a book to another, he explained, is trying to change the style, the content and to have each new book as a reply to the other. His newest book, for example, The Terrible Privacy of Maxwell Sim, is the story of the relationship between a father and its son and its using a humorous and ironic style, in comparison with the somber and women-focused atmosphere from The Rain. He confessed that in the case of the Rain, he tried to be visual and the photos used as the main narrative path are part of this plan. For a future edition, maybe he will add some real pictures too. The inspiration for the pictures was his own family photo album and the incredible resources from the Internet. Not a fan of the new social media, he used Facebook in the Terrible Privacy and is having an account - though with a modest friends' record - on Zuckermann's Social Network.
He used as inspiration fragments from real life - he even modified the end, after discovering that the model served for the blind children Imogen died herself - but transformed through the mind and eyes of inspiration. The title was found randomly, while listening the song with the same name to its iPod. And I love this title a lot, as it's describing perfectly the impression of perfection before something is really happening, the generous comfort of the ideas before being abused by the practice of the reality, the attraction of the dream, before you start the fight to turning forcefully the dream into reality.

Posted by WildWritingLife at 11 November

Email ThisBlogThis!Share to TwitterShare to FacebookShare to Pinterest
Labels: Berlin, Jonathan Coe, Terrible Privacy of Maxwell Sim, The Rain Before it Falls, writing