Running away with books 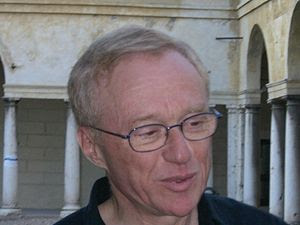 Image via Wikipedia/David GrossmanI love the titles David Grossman is choosing for his books: Someone to run away with, See under: Love, Zig-Zag kid. These three titles are direct translations of the Hebrew variant. The choice for his last one - To the end of land - from the Hebrew A woman run the news - is not so appealing, but didn't read the book yet. 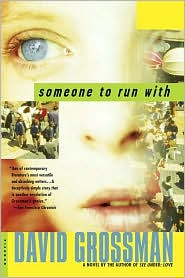 I am not an open supporter of his political opinions. As in the case of Amos Oz, I appreciated him enormously as a writing mind. But I am tempted to interrupt them every single moment when they are talking about politics. Not exactly every single moment, but most part of the time. Equally, he is imposing me the respect for listening and trying to understand the reasons behind these political choices. In the case of Someone to run away with, as in the case of the other books, the conflict from the Middle East is not present explicitly in the book. I've read yesterday a couple of reviews of the book insisting that the story between Assaf and Tamar might be an allegory of the possibility of a get together of the Jews and Arabs. I never thought this story in these terms.
I felt  very happy getting to know his characters: youngsters but still one step into their childhood, looking for social confirmation or unconsciously looking for dangers in order to form their opinions on life and death. I always felt very close to his characters: kids or young adults, even the animals (Dinka, in this case) are courageous and curious and open to discover the reality they are thinking about over and over again.
The plot of the book - the parallel (film-wise I may say) development of the episodes of Tamar's plan to safe his brother from the claws of the drug addiction and Assaf's efforts to find the mysterious owner of Dinka, a one-in-a-lifetime kind of meeting made - me think very often about the organization of an YA book. And the next step of this thought was that, in fact, the target of a book for me, as an obsessive reader, is not at all important - I am reading everything from the illustration to scientific books. And, in fact, successfully using ideas, style and characters from another theoretically assume literary category is the measure of writer's greatness. I felt the main characters - and the strange Greek self-recluse monk Theodora, who's disappearing suddenly without reappearing after the most important moment of his life - in flesh and bones, authentic and humanly problematic. In comparison, I recognized the limits of having this fantastic repertoire of humans in the book: the high concentration of sq. meter of page don't leave them enough space for breathing. In this case, the parents of both kids are evanescent and I would have been curious to find out more stories about the other inmates from the "colony of artists".
I've read too that it was made a movie after the book, but for the moment the main characters are still living and breathing with me so I am not interested at all in watching it.

Posted by WildWritingLife at 11 November