Bookish travel: At Brechthaus in Augsburg 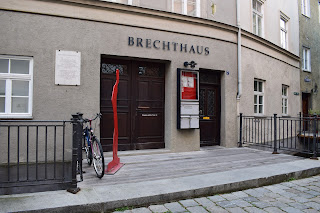 In the so-called trade center of Augsburg - Handwerkviertel - Lechviertel, flanked by two of the many water chanels, one can find the Brechthaus, the house where the famous rebel playwriter and theatre director Bertolt Brecht was born, on February 10, 1898. It is one of the many modest houses in the area, close to the paper mill where his father used to work and manage later at the beginning of the 20th century. 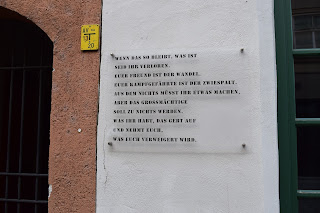 Brecht was born in a Catholic-Protestant family. Nowadays, there is more than a school bearing his name. The family leaved the house shortly after his birth. This house hosts nowadays a permanent exhibition about Brecht, as well as books by him.
Posted by WildWritingLife at 23 September