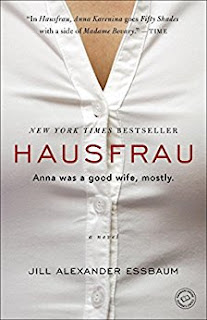 A modern times version of both Emma Bovary and Anna Karenina, Anna is an expat version of an American 'Hausfrau' living in Switzerland, married with a local man working in the banking sector and mother of three. She is filling her uneventful life with sexual adventures with men met on different random occasions. Anna collects lovers, each a 'version of love'.
The action is taking place during three months, from September to November, and the period of time is filled with episodes from the past, fragments from therapy sessions, encounters with new and old friends and meditations on language. The story has an extraordinary construction, made of paragraphs reflecting each other like mirrors, creating a certain density of the story.
From the very beginning, there is inequal intensity of the different fragments of the story, with reflections and projections being interwoven with intense sexual encounters and wanderings through the night.
At 38, Anna is searching: for herself, meaning of friendship, understanding home, finding a sense of her memories, her loneliness...Her everyday lies, her treasons, the incapacity to resist the temptation of doing over and over again the same mistake(s) are hunting her day and night, with the strength of a deadly psychosis. The first half of the novel promises a lot, a promise not delivered in the end. I personally got caught and charmed from the beginning - I've read the book in just a couple of hours - but as the story was reaching it end, my disappointment grew. I was not expecting a spectacular end, but even the predictable can be shaped in a proper literary form. Instead, I felt like that the last quarter of the story, despite with some dramatic shifts, was just hurried up to the reader.
The daily geographical and cultural background of the novel, especially the insights into the Swiss mentality, are authentic, probably based on the author's own experiences as expat in Switzerland.
Although the novel promises a lot but delivers only half, the author has a great writing potential and would be curious to read other works signed by her.

Posted by WildWritingLife at 23 September