This is How We Talk. Another Novel about Tel Aviv 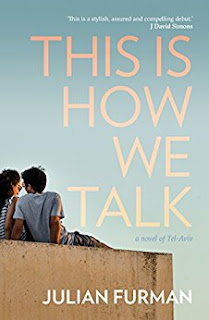 Recent books set in Tel Aviv - or Israel - aimed at a foreign audience, do have some common ingredients nowadays: post-Army depressed youngsters, eventually who spent an indefinite sejour in India or, more recently Thailand; Yitzak Rabin; leftist mindset; start-ups; the protests against the prices of housing couple of years back; secular background; the hedonistic night life in Tel Aviv. If there is space left, add a couple of expensive sky scrapers where one single apartment is the price of a lavish mansion in the priciest LA neighbourhood. A couple of observations about the rift between the Jews of Oriental origin and those of European origin. Sometimes, the kibbutz life is also present somehow, but this element is missing from This is How We Talk, the debut novel by Julian Furman.
It is rightly described as 'a novel of Tel-Aviv' because it has sometimes more to do with the city mood than with its normal people. In the words of Yonatan, the first character introduced in the novel: 'Tel Aviv is a hive of activity, but he senses all the excitement is occuring above his head. Giant cranes swing lazily through the day and night, towers growing, teasing of bountiful heavens just beyond his reach'.
Relationships do need context, and when the political and social context pervades the everyday life, it is almost impossible to ignore them. Especially when this context is foreign or assumed exotic to the reader, it might be so catching that in fact takes over the literary layer.
Four young people: Yonatan, Lia, Nadav and Sharon are telling their stories. At the beginning of the story, Yonatan and Lia are together. Nadav and Sharon - Lia's sister - come late and relatively for the blink of the eye into the story. The have struggles, are confused and want to escape themselves, their family secrets and the weight of the country. They succeed on short term - as Nadav and Sharon - but fail on the long term - Yonatan and Lia. The story of Yonatan, which opens the novel, can easily stand alone as a short story and it has speed and a balanced back and forth exchange down the memory lane. For the following stories, the sparkle is fading and I ended up asking myself if there is really any real connection between the characters, besides the fact that they are together under the same book cover. They can be foreigners meeting accidentaly on a hot day at the beach or in a club, and meeting each other again only because it is a small city.
Each character has the common features of being just your 'average Tel Avivian' next door, take it or not. Each story has a good flow and dynamic. There is a potential both in the story and in the writing. Maybe it is just me, expecting a bit more from 'a novel about Tel Aviv'.

Posted by WildWritingLife at 05 September

Email ThisBlogThis!Share to TwitterShare to FacebookShare to Pinterest
Labels: 3 star book review, a novel of tel aviv, bookish recommendations, julian furman, novels about israel, novels about tel aviv, this is how we talk